Until I heard about Rock Buckles, the new Cardinal I was most excited about based on nickname alone was footballa' Richard "Champ" Lee.  So where better to take the next installment of Better Know a Cardinal than the fellas responsible for the deep ball, the safeties.

One of the few recruits to migrate north from Florida, Champ Lee is a 6'0", 190 LB safety from Lake Gibson HS in Lakeland.  He is both a 2-star and 3-star prospect, according to Scout, and has committed to us twice.  I think that makes him the second most interesting man in the world.  At any rate, besides the name and the combined 5-star status, Lee is someone who bears watching.  He runs a 4.5 40-yard dash and picked us over WVU and some lesser institutions.  And, of course, he is Bilal Powell's cousin, which is worth some awesome points.

He's rated the 100th best Safety prospect in the country according to Scout.  He was on the Florida Sports Writers Association All State (3rd Team) for division 5A, which in Florida is a pretty big deal.  We are pretty thin in the secondary: we have Richard Raglin returning from injury, Daniel Covington....being Daniel Covington, two JUCOs who barely played last year despite an outstanding season NCAA 2009 campaign last August (Justin Mathews and Josh Wiley), and Chaz Thompson, who I was hearing good things about in 2006.  Apparently he's been converted to safety.  Anyway, don't be surprised to see #31 playing some on kick-off coverage and being the first guy to replace an injured starter midway through the season. 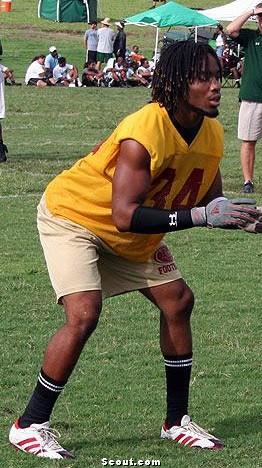 One of the first commits of the 2009 class was Shenard Holton, a 6'1'', 195 lb safety out of Bowling Green's Warren East.  A 2-star prospect according to Scout, with a 4.5 40 and an offer from Ball State, Holton generated a bit of a buzz on ITV when he committed.  A 4-year starter who, according to Demling, was contacted by Auburn and Nebraska, Holton stuck with the Cards despite being one of the "elite" players in the state.  He played both LB and RB in high school but as early as Feb. 2008 was projecting as a safety in college.

This video is AWESOME. Trust me. Big hits, nice runs, choppy playback that may induce vertigo, and the music, my god the music. Bravo, duffjr.

Anyway, Holton shows off some nice moves and there were a couple monster hits, although I admit I did not watch it all the way through.  One the music stops it is not quite the same.  But at like 7:55 it looks like he just takes the ball away from the RB and runs it back for a TD.  That's pretty badass. 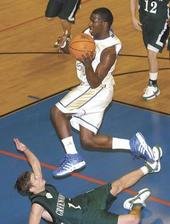 via profile.ak.fbcdn.net   Sucks to be that guy.

Upon his commitment, Demling quoted his coach as saying, "U of L is getting a hard-hitting, charismatic young man who possesses intangible instincts for the game of football.  He is highly aggressive, physical and plays the game with a nasty streak."  I like the sound of that. The bigger schools backed off, apparently, and he only took visits to the Belkap campus and Miami...no, not that one....the other one....but overall seems like a good pick up, and, more importantly, an in-state recruit who will be wearing red.

Either Holton or Lee should red shirt, because it wouldn't make sense to burn both their red shirt years.  But that doesn't mean it won't happen.

The most controversial recruit in the BKAC series, Isaac "Don't Call Me Jacob OR Geffard and no, Google, I did not mean Isaac Geffard" Geffrad, is a 6'2", 190 pound (or 6'3" 186 pound) 2-star out of Oakland Park, Florida.  His twin brother, who is listed as the same size, is slated to be a linebacker, so I guess it will be easier to tell them apart after 3 years of carbo-loading.

A four-year starter and captain his senior year, he was voted 1st team all county by the Sun-Sentinel and 2nd team all county by the Miami Herald.  Every Florida honor like that would seem to be worth another half star, if Scout gave those sorts of things out.  Rivals rates him a three star, which may be a combination of the honors and the shirt: 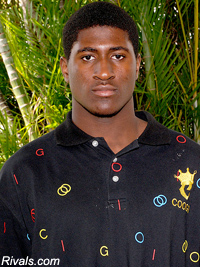 Geffrad chose the Cards over Minnesota, Iowa State (Chizek is a recruiter and defensive guru, remember) and both Florida Atlantic and Florida International (Howard knows talent), so he is a bright spot in the class.  Miami showed interest.

Isaac is very fast and competed in track in Florida, running a 10.7 100 yard dash.  Again, not sure why he is slated as a Safety while his brother projects as linebacker but don't be surprised to see both of them on the outside in 2-3 years.

Finally, an "unheralded" "sleeper" 2-star out of Riverdale, GA, Hakeem Smith is a 6'1", 180 pounder who the coaches believe can be an impact player, according to Scout.  Primarily a blocking WR on a run-oriented team (which shows dedication and an apparent proclivity for hitting people), Smith's strengths (per Scouts) include "Coverage Awareness", "Jamming Ability" and "Toughness", but he needs to work on his "Closing Speed", "Recovering Ability", and "Size", so it seems like maybe he would be better as a CB?  No word on his hips.

While Scout doesn't list any competitors for his services, Rivals says there was some interest from/in Vandy and UVa, and since both schools enjoy rankings higher in the US News poll than the ESPN poll, I would imagine there's only a small chance he won't qualify.  Apparently we were his first offer and he committed right then and there, so he knows how to make a decision and stick with it.  That has to translate to the field somehow.  His coach says he's a big hitter and a natural talent who will get better as he gets bigger.

ESPN.com evaluated him mainly as a WR and says that Hakeem "is a very solid skilled athlete tht should be a major contributor at the next level", once the coaches figure out a position for him. It looks like Safety is where they will start.

All in all, these guys seem like they have potential to be long-term contributors.  Hopefully they aren't rushed into the rotation, although because we just have 5 returning safeties, we are often in 5-DB sets and injuries are unavoidable, I imagine we will see at least 1 of them if both Holton and Champ Lee sooner rather than later.