A Card Chronicle Exclusive: Art Carmody graced us with an update on how he's doing. I just asked him for a quick summary for the fans, but he took it a step further...

About CC: "I can't stress enough how great of a website it is. You guys do a hell of job and I really enjoy reading it. It might be the best website ever made and I would politely ask anyone to prove me wrong."

On life in the South: "Things are going great down here in Shreveport, I am currently working for Chase Bank and playing AF2 football for the Bossier-Shreveport BattleWings (still trying to figure out why we combined two cities for the name, there has got to be some sort of political reason behind it or something). I love to kick so choosing to play AF2 ball while starting a career (hopefully) at Chase has been a lot of fun."

On why The Man keeps holding him down:  "I haven't had any NFL looks since last summer with Tampa Bay. It was frustrating but that is just how it is. My lack of kickoff leg strength was the big reason why I haven't had any looks. I had a lot of interest from AFL teams before the league folded this past December and had interest from Edmonton in the CFL until they re-signed their veteran kicker."

And more love to CC: "Card Chronicle has never let down Cardinal fans...Take care and best of luck with everything.

P.S. Also, please send my best to Mike Rutherford, I would like to shake his hand one day. Thanks."

So this proves CC isn't just perused by the "Joe Plumbers" of the world, but also by Groza award-winning kickers. Mike should just about be running pantless at work now after reading Art's last line. 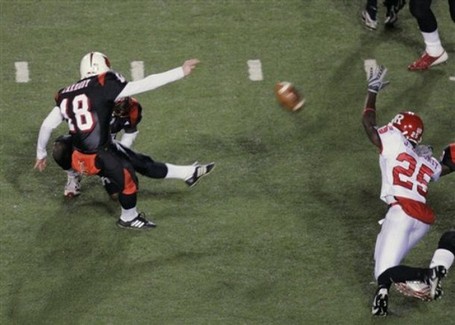