The staff of Card Chronicle has been commanded by Mike put our collective heads together and decided that a good way to pass the days until the first practice on August 6th would be to get to know the newest members of the Louisville football Cardinals, especially since many of them will likely be logging significant minutes this season.  We'll start our journey with the new Defensive Tackles, JUCOs all.

And who better to start with than our only 4-star recruit according to Scout.com, the Ari-Wolfe-Is-Never-Going-To-Pronounce-My-Name-Right-Award-Winning Peni Fiu'angaietau.  Sound it out, Ari.  Anyway, Peni comes to us from Phoenix CC and will have two years of eligibility.  At 6-2, 270, Peni would seem to need to bulk up a bit to be effective in the middle, but because LT Walker can't play every down and be useful in the 4th Quarter and because the only other DT I'd heard of before starting this project is Tyler Jessen, I imagine we'll hear announcers valiantly trying to prounounce Peni's name a lot next year.  With reported offers from Cal, Oregon and Utah, I believe Peni is also the most-sought-after recruit to commit to us, so beating out those schools is somewhat of a coup for Krag & Co. 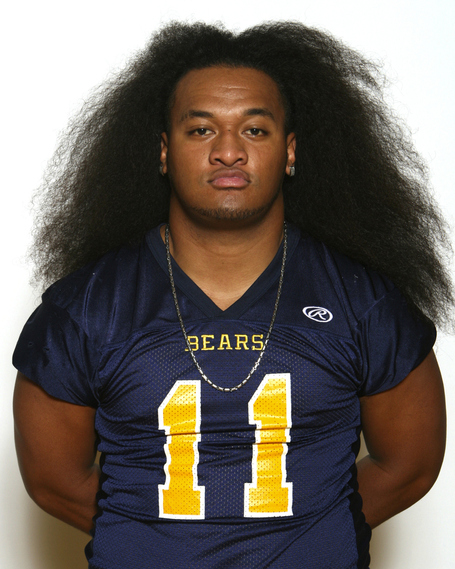 Peni's stats are somewhat impressive, as he was third on the team in total tackles and second in sacks.  He was tied for 2nd on forced fumbles....with 6 other dudes...with 1 each.  For what it is worth, the leading tackler on the team signed with BYU and is also a two-star.  There are no videos of Peni available at press time.

All in all, our highest rated recruit happens to be at our thinnest position, which is good.  Also, my goodness, look at that hair! Peni, we who are about to blog about you, salute you!

Thanks to the alert readers in the comments, there is some question of whether or not Peni will actually make it to campus.  According to Rivals, he is "Committed/Unsigned".  I guess we'll just have to wait and see.  On the bright side, Rivals lists one of the OL recruits as our only 4-star, so we at least have one 4-star who has signed.  Oy.

At the other end of the Scout.com rankings of our commits is Joseph "Joe" Townsend, a 6'3'', 285 pounder who was originally signed out of high school at Washington State for the 2006 season, then went the JUCO route and was signed by Butch Davis at UNC (impressive!) before last season and Nebraska (also impressive!) before the 2007 season.  Grades and no doubt some bad luck prevented him from enrolling at any of those previous locales.  I have no idea if his nickname is Joe but that would certainly make sense.  Anyway, he seems to have worked hard and put his academic struggles behind him and also apparently has bulked up and grown an inch, since the official roster at uoflsports.com lists him at 6'4'' and 303 lbs.

I'm glad Mike cracked the whip  we decided to do this little project because I am mildly excited about this guy now.  Nebraska and UNC under Davis both get quality recruits, and if his size is somewhere between what Scout and Kenny Klein say then he at least starts out big enough, even if he's not huge.  He comes from a solid football pedigree, as his older brother played DT for Nebraska on their MNC teams in 1994 and 1995 and made it to the NFL wth the New Orleans Saints.   To the optimist in me, it sounds like he just needed a little bit of time to get his head on straight, and the coaches saw enough in his talent to make the effort to help get him there. 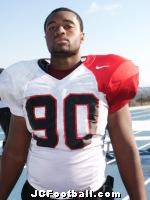 I can't seem to find any stats or specific proof of his abilities but according to his Scout.com profile he was first-team all league his senior year of high school and has bulked up since then.  Again, DT is our thinnest position (not literally even if we are on the small side) and there might be some "diamond in the rough" potential with Mr. Townsend.

Rounding out the round mounds in the middle is JUCO DT Tim High who checks in at a mountainous 6'2'', 310 lbs.  His stats certainly look the part, even if he doesn't in this padless picture: 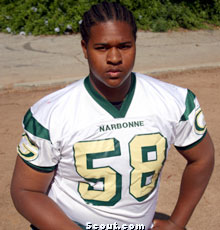 According to Demling, High took an unusual route, spending two years at UNLV before frustration wth playing time led him to El Camino Community College.  There, he recorded 24 tackles, including 3 for a loss, good for 11th on the team but 2nd among DTs (and also a few behind linebacker Terrance Williams!), and the other DT was just ahead of him, so maybe they faced a lot of spread offenses or something.

Anyway, High should provide a breather for whoever provides a breather for LT, or, if we finally switch to the 3-3-5, be able to learn the system for a year.  And hope that whoever replaces the current regime has a place for him.

So those are the new DTs.  The defensive line will need all the help it can get.  Peni had some BCS offers, and Townsend clearly has talent and could have a WWI-type career here if he gets his grades in order.  And Tim High sure is big.  Just get pressure on that QB, fellas, and play hard.  Welcome aboard!

(Author's Note: I am going to try to avoid writing anything critical about individual UofL players, especially ones who have never played a down, mainly because these guys are college kids who are just living their dream and who deserve nothing but our support unless they heinous commit crimes.  That said, let's be honest, the recruiting is not where it needs to be and that falls on one guy and one guy only whose days are numbered, I hope.)