Share All sharing options for: T-Will being T-Will in Jersey

I miss him already.

Terrence Williams was introduced as the newest New Jersey Net during a press conference in East Rutherford this afternoon. He addressed the local media for the first time in a manner that should surprise no one reading this.

Reorienting his focus to the microphone in front of him, Williams paused for a beat. Then another. He separated his folded hands, placing palms flat upon the table as he hunched slightly toward the mike.

"… Hello," Williams said, breaking into a wide smile as he leaned back. Laughs rolled through the room, and it became apparent that if the Louisville product’s timing is as good on-court as it can be in a quip, the Nets will have aced the 11th pick. Williams continued:

"I would like to say to the staff here, thanks for believing in me and the new direction that you’re trying to go in, and drafting me No. 11. A lot of people thought I was going to go somewhere else, but I felt when I first met them, when I went to lunch with them, I would like to be here because they’re straight shooters, like Coach (Rick) Pitino. This is a great situation for me, and so I’d like to really thank them for making that call to and saying, ‘This is who we want,’ and it happened to be me. I want to start off by saying I really appreciate that from you guys.

"To everybody else: I know there are things that I need to work on. With my hard work and dedication to playing basketball, I will work on those things. I’m not coming here trying to be something I’m not, I’m coming here to try and help win games and listen to the coaching staff. I’m excited to be a New Jersey Net." 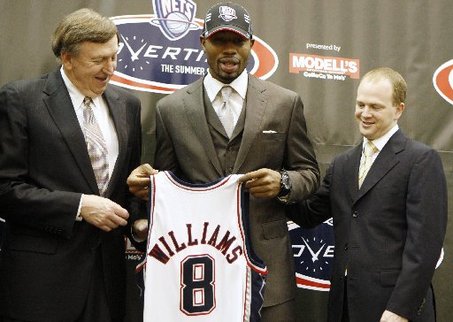 With Raefer Alston recently being traded to the Nets, T-Will also stated that he is making the switch from his familiar No. 1 to No. 8.

And Williams’ good humor and dynamic personality will likely help to keep the locker room loose. Always one to put pen to page as an outlet, when it came time to choose a major at Louisville, Williams almost opted for creative writing rather than communications.

"I can write about anything," Williams claimed. "I was going to do that in school, but their creative writing was more structured writing -- it wasn’t creative, so I didn’t want to do that. But I like to write short stories, poems. So if you ever get into an argument with your girlfriend, I can write a love poem for you."

And a single tear rolls down the author's face.