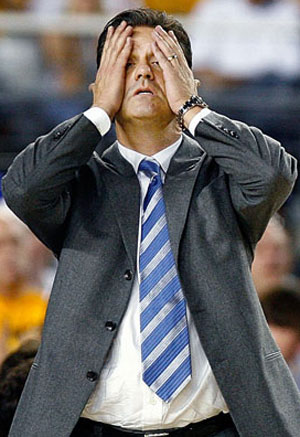 Indiana fans convinced themselves Sampson was clean for a solid two months. Something tells me it'll take a bit longer for reality to reach Big Blue Nation.

The University of Memphis is in the process of responding to an NCAA notice of allegations charging the men’s basketball program with major violations during the 2007-08 season under John Calipari.

The allegations include "knowing fraudulence or misconduct" on an SAT exam by a player on the 2007-08 team.

The wording of the report seems to indicate the player in question only competed during the 2007-08 season and specifically the 2008 NCAA tournament. The player’s name was redacted in the report, obtained by The Commercial Appeal through the Freedom of Information Act, due to privacy laws.

The player has subsequently denied the charge, according to university personnel.

The only player on the roster who competed only during that season was Derrick Rose, who subsequently was the No. 1 pick in the NBA draft last June.

If proven to be true, the Tigers could be forced to forfeit their NCAA-record 38 victories and Final Four appearance.

A copy of the letter from the NCAA can be viewed right here.

Pig-pen thinks the man could use a shower.