Rick Pitino claims he is the victim of an extortion attempt

Share All sharing options for: Rick Pitino claims he is the victim of an extortion attempt

Yelp if you saw that headline coming.

My family and I were recently threatened as part of a criminal scheme to extort money. Upon receiving these threats, we reported this extortion attempt to the FBI. While I did not want to make this matter public, I recently learned that the individual behind this extortion attempt has already gone to the media with false, defamatory and outrageous allegations in an attempt to pressure me to cave in to this scheme.

I want to make it clear that I intend to vigorously defend my reputation and the character of my family against any criminal scheme to extort money. I am hopeful that the media and public will recognize the slanderous nature of this direct and malicious attack.

In the original Jeff Goodman story for Fox Sports, Karen Sypher, the wife of U of L equipment manager Tim Sypher was identified as the person attempting to extort money from Pitino. Karen Sypher reportedly recently cut an interview with WDRB 41, but the station chose not to air the content.

After her identity leaked, Louisville attorney Thomas Clay called The Courier-Journal and said he represented the woman being investigated by the FBI.

"There is a federal investigation going on, and there may be criminal charges placed against her as a result of what coach Pitino has brought to the attention of the FBI," Clay told the paper. ". . . There are no counter allegations, and as far as I am concerned this criminal investigation is going to proceed to a logical conclusion and I hope that we can put this matter behind us as quickly as possible."

For those of you desperate to put a face with the name, here is Mrs. Sypher at last year's Derby. 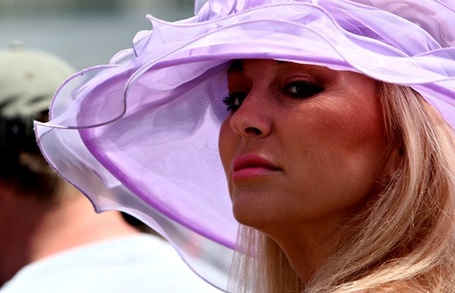 You'd have to think this is the right move for Pitino if he has nothing to hide, but that doesn't decrease the likelihood of things getting increasinlgy ugly in the succeeding weeks.

UPDATE: It appears Karen is in the process of becoming the former Mrs. Timothy Sypher.

And the plot thickens...or something.