Cornell became the first squad to punch its dance ticket last night by clinching an outright Ivy League title. Friday also saw a great day of quarterfinal action in the Valley, as well as the first toppling of a No. 1 seed this postseason.

Three titles are on the line Saturday, but first, let's look at the best of the day that was.

Game of the Night

All four quarterfinal tilts in the Valley were entertaining, but second-seeded Creighton and No. 7 Wichita State provided the game of the '09 postseason thus far.

After trailing by as many as 22 in the second half, Wichita State took a one-point lead after Toure' Murray buried a three-pointer with nine seconds to play. Creighton failed to convert on the other end, but a Shocker player dropped the rebound and the ball went our-of-bounds and back to the Bluejays with 1.9 to play. Naturally, MVC Player of the Year Booker Woodfox got the ball in his hands and buried a jumper (see the video here) to beat the buzzer and keep Creighton's Missouri Valley - and probably NCAA Tournament - title hopes alive.

"I'm excited we won but I'm extremely disappointed with what happened in that last 10 minutes," Creighton coach Dana Altman said. "By the time I got to the locker room, I was very upset. I didn't let them off the hook.

Woodfox missed all five shots he attempted in the first half, but scored 17 in the second.

Creighton (26-6) moves on to face Illinois State in Saturday's semifinals. 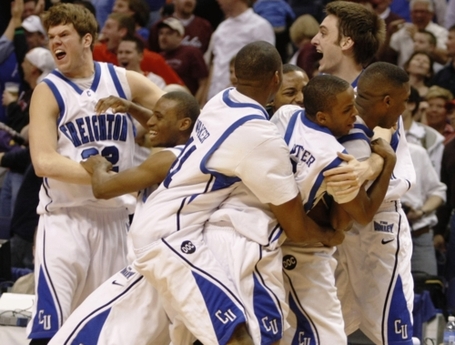 Upset of the Night

Two-time OVC PLayer of the Year Lester Hudson scored 34 of UT-Martin's 55 points and snatched 10 of its 27 rebounds, but it wasn't enough to get the top-seeded Skyhawks into the conference title game for the first time.

I am more upset for No. 5 (Hudson) than anybody else," said UTM coach Bret Campbell. "He came to play, and he didn't get any help.

"Lester makes his teammates better, but his teammates didn't allow that to happen. After everything he has done for this program, we couldn't let him dance. It is disappointing that the country won't see him in the NCAA's field of (65)."

As a result of their regular season title, Tennessee-Martin has earned an automatic bid to the NIT.

Player of the Night

Martin earns the honor for the second time this week after dropping 34 and 10 in his final collegiate game.

Scored 22 points and snatched 17 rebounds in his team's semifinal upset of NO .1 UT-Martin.

Scored a game-high 30 points as ETSU knocked off three-time defending champion Belmont in the A-Sun semis.

Kept the Purple Aces in their quarterfinal loss to Illinois State by scoring 29 points.

Scored a career-high 32 points for the Dons in a losing effort.