I said the same thing after we beat St. John's last year, but I think this is the Big East game that Louisville fans will have the hardest time remembering when we start to look back at the season in April.

Ugly? Yes. Boring? Totally. Final margin respectable enough that even those who watched it will have forgotten most of the details in four weeks? I'd say so.

While the first 32 minutes were more difficult to sit through than anything produced by Tyler Perry (I hate him, I really do), the Cards ultimately did what they had to do to pull out a win on a day when they hadn't played particularly well in a place where they've found wins hard to come by.

I'm not going to complain.

If Sunday was anything, it was a testimony to the maturity of Jerry Smith.

On a day when Terrence Williams struggled with his shot and Earl Clark again played erratically, U of L had to have someone else step up to avoid a devastating loss, and the person who did was the one with the most reason to sulk. Coming off the bench in a conference game for the first time in recent memory, Smith came up with big play after big play down the stretch, including an 11-for-11 performance from the charity stripe.

I said last week that I was worried about the freshmen center swap in the starting lineup because of the immaturity of both payers involved, but I never once had a problem with Preston Knowles starting over Smith because Jerry pouting or not giving maximum effort is never a concern. All the man wants to do is win, and he wants it as much as any player we've ever had here. 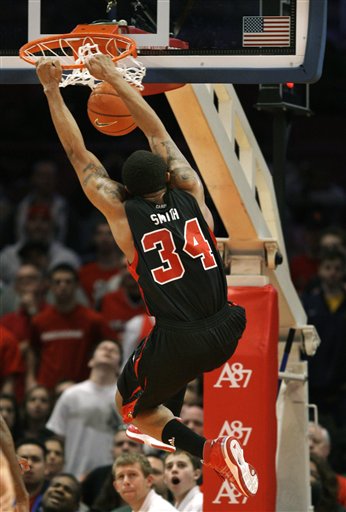 Next year's Senior Day: Jerry's last home game and the last Louisville game ever played in Freedom Hall. A trip to Sam's Club for a bulk Kleenex purchase is definitely going to be necessary.

Even so, he made several key assists when we really needed a bucket, and he stepped up and hit two enormous free-throws late in the game. A hindered Terrence Williams is still better than about 90% of the players in college basketball.

You hate to see anyone this side of Tyler Perry get his teeth knocked out and sent to the hospital, but you really hate to see it when they're playing as well as Samardo Samuels was yesterday.

The surprising emergence of Terrence Jennings over the last three or four weeks has obviously been extremely beneficial, but I still think this team's best shot at making it to Detroit comes with an improved Samuels finishing strong around the bucket. There just aren't that many teams out there that can keep Williams and Clark out of the lane with any consistency, which means whoever's in at the five is going to keep getting opportunities for chippies.

Even though he was continually leaving 8-10 points on the floor (or 38 against Ole Miss) in December and January, Samuels is still the most polished of the trio of freshmen bigs, and him finishing as well as he did in the first half on Sunday was an extremely encouraging sign for this team's March prospects. He doesn't have to be Greg Oden, he doesn't even have to be Dejuan Blair, he just has to be the player he was yesterday.

All that said, this was a game Louisville would have been about three times more likely to lose had it been played in November, simply because neither Jennings nor George Goode were anywhere near ready to shoulder the load for an entire half. Yesterday, Jennings played 17 minutes in the second half, pulled down seven big boards, blocked four shots, scored four points and only gave the ball away once as his team outscored a physical conference foe by 16 in the final 20 minutes.

I don't know if the dim lighting makes everyone sleepy or if the scarcely attended games makes it harder to get up, but it feels like we play about three times slower inside Madison Square Garden than we do anywhere else. I can understand not playing well at a particular venue, but I can't understand not playing hard.

Not quite willing to call it a Bad Edgar sighting, but I think it was the closest we've come since the Kentucky game.

Earl Clark wasn't bad on Sunday, but he was far from spectacular. We need him to have an enormous offensive output sometime in the next couple of weeks to restore some of the confidence that seems to be sliding away.

Every time I watch St. John's play the game looks like a 9-on-9 playground game at a middle school recess. Three guys are tugging at the ball in the lane, no one's stopping play, and then finally one guy rips the ball away and chucks it at the goal as quickly as possible. It's pretty disgusting.

Norm Roberts is not very good at coaching basketball, but he might have some more success in the MEAC or Big South next season. 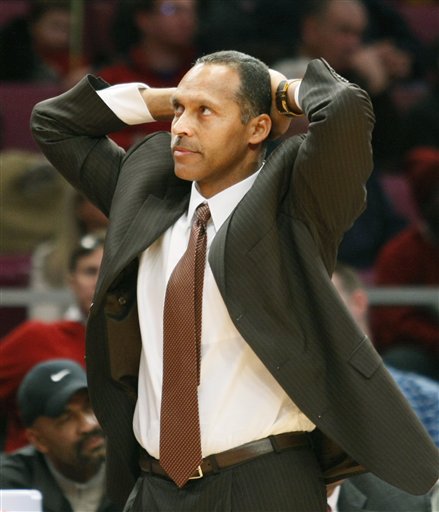 I don't care if they've lost seven straight and looked like Highland Middle at UCLA on Saturday, I'm worried about going to the Joyce Center on Thursday.

On the other hand, I'm not worried about at all about Depaul coming to Freedom Hall on Sunday, but that's for another day.

Almost Dunking Marques Maybin is still a hero, but don't be surprised if he gets the night off in three days. Nothing is official at the moment, but I'm just making the ADMM fanatics aware so that they can brace themselves.