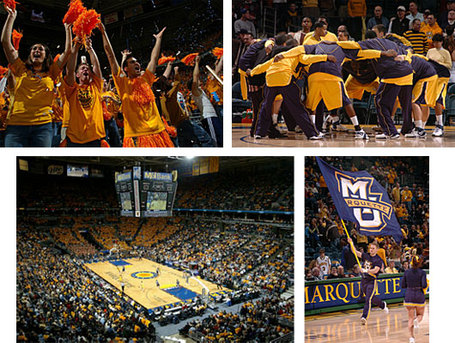 Attention shoppers: outside today we have...cripple fight. Cripple fight, outside.

Any shot Rutgers has at finishing last in the Big East hinges on a loss here.

Mason has been wildly inconsistent over the last month, but a loss to the CAA's cellar dweller would be shocking.

Why couldn't this game be at 9? It's been a rough week and I really feel like rooting hard against somebody not out of necessity but out of, you know, revulsion.

It's all exhibitions until New York for these two.

I wonder if Cheick Diakite is any relation to Nouha Diakite. If he is, then my distaste for VT just went up for the first time since the '06 Gator Bowl.

If you read The Miracle of St. Anthony (and you should have) you'll recognize the name Derrick Mercer, who is now the diminutive starting point guard for the first-place American Eagles.

This is the point where, if you're a Blue Demon fan, you just go ahead and root for the imperfect season and start brainstorming with your buddies about t-shirt ideas.

I haven't followed the Hawkeyes particularly closely, but every time I catch an Iowa score or highlight segment, it's not pretty. I wouldn't expect tonight to be much different.

On any other night, the "JJ is Redickulous--ly gay" picture would have been a given for this post, but Buzz needs our help, and my priorities are in check.

I fear Mizzou's destiny is to be the well-seeded team everybody has losing in the first round come three weeks from now.

Charlotte has four A-10 wins, half of them are over the top two teams in the league and a third is over George Washington. I'm not really going anywhere, I'm just saying.

A big game because of...seeding?

How in the hell did we lose to these guys without Wink Adams?