Cards cruise past Georgetown in D.C.

Share All sharing options for: Cards cruise past Georgetown in D.C.

Every Big East road win is like a bear hug from Jerry Smith on Christmas morning, but to me Louisville's 76-58 victory over Georgetown Monday night was especially girly-scream/clap-worthy.

Sure, Georgetown is reeling, but this is a team that would almost certainly be a lock to make the NCAA Tournament if it resided in any conference outside of the Big East or ACC, and the Hoyas were playing at home - where they tasted defeat not once a year ago - and with their season on the line. When you add in the fact that the Cards had just one day to prepare for a team that runs a pretty complex offense, I don't think being giddy about an 18-point victory is an overreaction.

The final margin may indicate something more lopsided than the game actually was, but the truth is that the outcome was never really in doubt. Louisville was more physical, more efficient and more mature than a squad which has built its reputation on excelling in those three areas in recent years.

Thirteen and two, sixth in the country, and right in the thick of the race for both a conference title in the nation's top league and a No. 1 seed in the NCAA Tournament.

It doesn't get a lot better than this for diehard college basketball fans. Eat it up.

Preston Knowles actually wrote, directed, produced and starred in Slumdog Millionaire, but was too humble to show up at the Oscars on Sunday.

We thought the kid was locked in towards the end of last season, but this is absurd. I watched him catch-and-shoot on that out-of-bounds play early in the second half, I saw the ball drifting toward the left side of the rim, I said outloud, "that's off," and I was still shocked when the net didn't rip.

Oh yeah, and he's the best defender since Dr. Strange.

Williams and Clark will steal all the headlines, but it was our guards who completely outclassed their guards.

You have to praise Wright's effort, but he still had four turnovers to just one assist. Freeman, who played so well in last year's de facto regular season title game, was a non-factor. And aside from a solid defensive effort, Jessie Sapp's only real contribution was a banked in prayer (chest-thump worthy?) to end the first half.

On the other hand, we had Preston doing what Preston does, McGee harassing defensively more than Matlock, Jerry Smith not fouling once and knocking down semi-contested shots from the outside, and Good Edgar popping the question and proving that he wants this thing to be forever.

That was about as animated as I've ever seen John Thompson III. Another indication of how much this game meant to the Hoyas and, in turn, how impressive the win was. 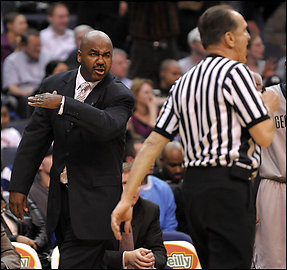 There's nothing normal about Earl Clark.

He's easily the most frustrating player on the team, but you never want him out of the game. You criticize him for being lazy, only to see that he's two assists away from being the fourth player in school history to record a triple-double. And then there are nights like Monday, where you find yourself constantly bitching about his play, only to look up and see him easily leading the team with 22 points.

Good shooting is often the basketball equivalent of makeup, and Earl was heavy on the blush against the Hoyas.

He made several bad decisions when the ball was in his hands, got out-hustled on a handful of occasions and missed key free-throws when the game was still in jeopardy, but he was uncharacteristically hot from beyond the arc and found his stroke from the stripe when victory was well in hand.

It sounds silly to say when he scored 22 points in a game his team won by 18, but Earl has to be better.

Jumping when you haven't the faintest idea what you're going to do with the ball is one of the biggest get-your-ass-on-the-bench-worthy sins in basketball, but I have absolutely no problem with Terrence Willing doing it. Why? Well, when you can come as close to flying as humanly possible you're afforded certain luxuries, one of them being the right to break one of the most widely celebrated basketball faux-pas.

I'm sure everyone knows the play that brought this up. it's the one where Williams drove towards the basket, jumped with no one open and no way to get a shot off, hung in the air until Jerry Smith got free on the perimeter, fired a rocket pass to Smith at the nadir of his leap, and then watched his teammate knock down a momentum-shifting trey.

Of course it also helps when it comes to being able to do things like jump, get hit in the head, double-clutch and still finish a dunk with ease. The post-dunk camera stare was nearly as solid.

Simply put, another tremendous performance from T-Will. The only thing that worried me was how badly he missed his free-throws after Georgetown had blatantly singled him out to send to the line in the game's final minutes. Shooting is so mental (that's come up a lot here recently, hasn't it?), you just have to hope that Williams' current confidence didn't take any sort of a hit .

What in the world has happened to DaJuan Summers?

The man who drilled the dagger in last year's Verizon Center classic, and the man who was expected to step up and become the type of player Jeff Green was two seasons ago in Hoya land has been relegated to wandering around the perimeter and completely disappearing (literally...it's creepy) for significant stretches of time.

It's always unfair to place the blame for a disappointing season on one man's shoulders (except in golf or tennis), but it's certainly safe to say that Summers' inability to become the player most predicted he'd be by his junior season has contributed more to his team's lack of success than the performance of any other Hoya.

If he drops 30 and Georgetown knocks us out in the quarters of the Big East tourney in three weeks, I'll buy one of those sweet "We are Georgetown" shirts and wear it to next year's game in the Hall.

If I were a professional baseball player, the song that plays in the background of the whale-splashing Pacific Life commercial would totally be the music I'd use when I walked up to the plate.

It's a friggin' beat.

In all seriousness, how fantastic is it so see a player improve so dramatically in an area of the game where work and focus play such a large role? It says a great deal about the young man as well as the men working with him.

Samardo Samuels was obviously jacked for the showdown with his fellow co-Preseason Big East Rookie of the Year, which was a positive. Rebounding and turnovers are still major issues for the freshman, but the improvement is pretty clear to see from where I'm sitting (in a chair, usually). He doesn't make that little jump hook two months ago, and he probably doesn't put himself in position to get those bunnies either. 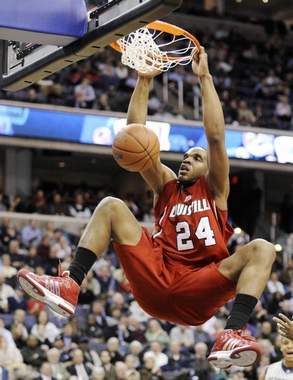 If he and Jennings make the same kind of jump in the next four weeks that they made in the last four weeks, then we could be in for a pretty special March.

Happy Birthday, Will Scott...sorry you had a horrendous foul called against you.

The officiating was so bad on both ends of the floor that I think it sort of canceled itself out and the game finished with a final score that would have been similar to the one a competent group of referees would have produced.

Blowing whistles with no idea what you're going to call is no way to go through life.

Just when I thought Mike Patrick couldn't jump any higher on the not cool with list, he goes and refers to Louisville as "The Cardinal" on several occasions.

In case you hadn't heard, I hate that. I really, really, really hate that. It's CardinalS. I know it's on all the pieces of paper you have in front of you, I know you've heard it pronounced that way hundreds of times over the course of your career, say it correctly you overpaid, disreputable jackass.

Just sayin'...it's a little thing, but it rubs me the wrong way.

I still think he has the potential to be a solid college player if he dedicates himself to putting on a significant amount of muscle, but Jared Swopshire isn't giving us anything but space right now. The kid's undoubtedly doing the best he can, but I cringe every time I see him check in, and only hope that we don't lose any ground before Earl's caught his breath.

So Sunday is a "White Out," the game will be on CBS, and we're facing a longtime rival in what is essentially a Big East regular season title elimination game.