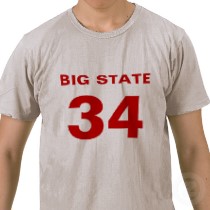 Charlotte's had a rough time since the move to the A-10, but I can't help but think that they'd still beat us at least once a year if they were in the Big East.

ESPN FullCourt works in strange and mysterious ways that I don't think any of us will ever be truly able to understand.

Probably the two best teams in the Sun Belt going at it...in bed...no, no I'm just kidding, they're going at it on a basketball court in a game of basketball.

I'm guessing this one was locked in before the season started.

Are we sure this isn't a fake game being filmed for a low-budget movie? Because it sounds like it is, and I'd sure like to spare the folks at ESPNU some serious embarrassment.

I still haven't forgiven the Bonnies for choking against UK in the 2000 tournament.

Tim Floyd hopes President Obama can do something about his team's three-game losing streak.

Forget the economy, we need to open up a national dialogue on this mysterious apostrophe in Hawaii. Is it necessary and accurate? Or is it like pronouncing the X in Mexico like the English H? Hawaiians ('ians?) themselves are obviously going to be biased, so let's go ahead and open up the floor to everyone.

The Bruins win and you've got a whole mess of teams in a virtual tie for the Pac-10 lead. This one should be worth staying up for.

The Toreros have lost 6-of-7 and Patty Mills is out with a broken right hand. Not exactly what the folks at ESPNU were hoping for, but they kind of deserve it for the aforementioned Tech/State faux-pas.