This was a very encouraging win on a number of levels.

First, we couldn't have asked for a better time to have six different guys score in double figures. After seven straight sub-par offensive halves, Louisville really needed these last two games to restore some confidence heading into a pair of road contests against teams that would just as soon see the score stay in the low 60s or 50s. Facing a poor defensive team means little if you're not knocking down the surrendered open shots, but the Cards have flirted with triple-digits in consecutive games, a welcome change after four straight sub-70-point efforts.

Hours before tip, I stated that Providence was one of the few teams in the league capable of matching Louisville's depth, and that the Cardinal guards would be unable to wear down the Friars as a result.

Papa slips up every now and then.

When Sharaud Curry hit consecutive jumpers to give the Friars a 53-50 lead early in the second half, it looked as if the score-first floor general was on the verge of one of his unconscious outbursts. Instead, it was the last field goal he'd net.

After shooting 75% from the field and 4-of-7 from behind the three-point line in the first half, PC connected on just 30% of their shots in the second half, and missed their last 11 three-point attempts. The low point came when a gassed Brian McKenzie missed a wide-open trey in the corner by about five feet.

Louisville finished the night with 94 points on 24 assists and nine turnovers, while Providence left Freedom Hall with 76 points on just eight assists and a whopping 22 turnovers, seven more than their season average.

Preston Knowles is absolutely locked in. Even the one deep three he missed was right on line, and Knowles looked shocked when it didn't drop.

It's crazy what being so confident in your shot will do to the rest of your game. We've never seen Preston do something like go coast-to-coast with the ball in his hands and then drop a no-look bounce pass right on the money the way he did with Terrence Jennings early in the second half Wednesday night. He may be our best offensive guard right now.

Oh yeah, and he made 12 deflections, recorded two steals, blocked a shot and made life a living hell for whichever opposing guard had the ball in his hands every second he was on the floor.

Sometime around the first tv timeout of the second half, my dad and I agreed that it had been a surprisingly quiet and well-officiated night from Jim Burr and Ed Hightower.

Let this be a lesson, never praise an individual or group of individuals with a proven track record of atrociousness until they've completed their task in full.

For the next 15 minutes, Hightower posed and yelled unnecessarily while Burr tried to one-up him by whistling a pair of technical fouls, the second even more absurd than the unwarranted first.

After Knowles was whistled for the technical, he had the unenviable task of trying to explain himself to an already perturbed Rick Pitino.

The best part of the whole sequence of events was watching Terrence Williams try to defend the sophomore. Williams watched Knowles give his explanation closely and then stepped in and made the exact same hand-motions Preston had, even though there was no possible way he could have seen what happened from where he was on the floor.

It's what senior captains are supposed to do, and it was pretty cool to see.

So I think it's safe to say T-Will's hurt wrist is feeling better. Just another 17-point, eight assist, 7-of-11 from the floor night. 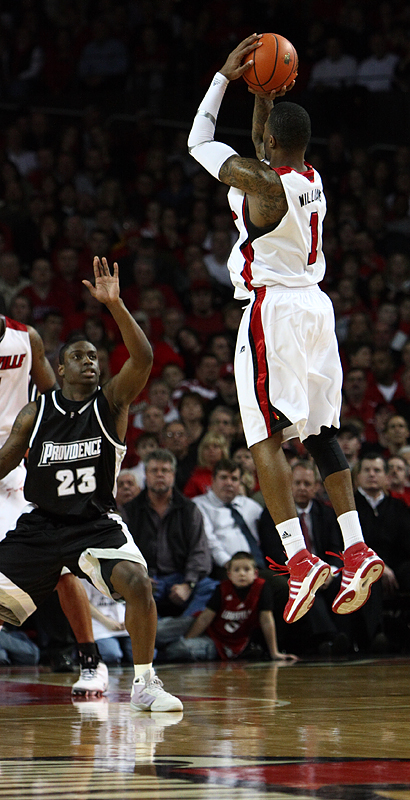 Obviously, we're going to miss Williams' game next year, but his on-court shenanigans are going to be equally irreplaceable. Who else is going to grab a ball that had been wedged in the rim for five seconds, dunk it, and then (jokingly?) try to get the referee to count the bucket?

Doris Burke claimed at one point that Williams' personality would get him to the NBA. I'm not a draft guru, agent or franchise executive, but I don't think it works that way.

If Jerry can hit that pump-fake, step back three with some degree of consistency, then it's going to be a huge leap forward for his game. The pump fake has gotten his defender in the air all season long, but his inability to do anything with that extra step has rendered the move essentially meaningless. He's got to find ways to create shots for himself against teams that defend the perimeter well, so this is something I'd work on relentlessly in practice.

I love the way the quartet of guards have banded together to become sort of a team within the team.

This wasn't Edgar Sosa's game (I'm aware that he led the team in scoring) and he accepted that. Even though he didn't see the floor for the first eight minutes of the second half, Good Edgar was standing and applauding right alongside Knowles when Jerry Smith's layup pushed the lead to 61-53.

Each of these guys bring different things to the table (unavoidable cliche), and to see them get behind one another even in games not conducive to their particular strengths is very encouraging.

The importance of group cohesiveness in relation to success cannot be overstated.

Another step in the right direction for Samardo Samuels, who is showing more confidence in his jumper as well as his jump hook in the lane. The wide-open, "should I be dunking this?" lay-up is still an area of concern, however, as is rebounding and staying on the line on free-throw attempts.

Not a concern: having every single one of his dunks captured by each photographer in the building. 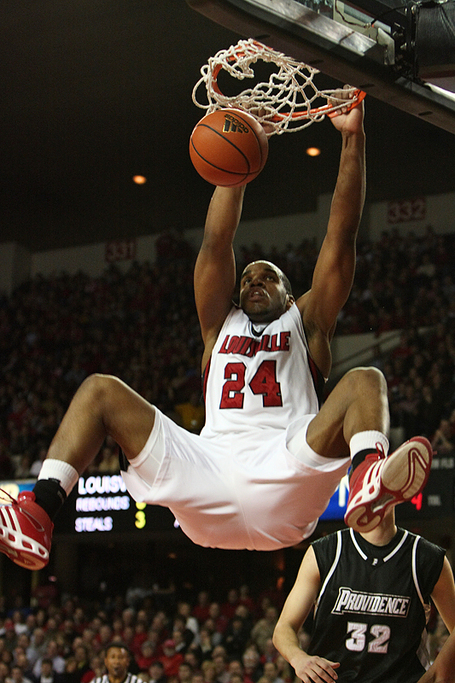 If you only followed college basketball through postgame photographs, Samuels would have to be your front-runner for national Player of the Year.

He's grown up a lot since December, but Samuels still needs to take his game to that undefinable next level sometime within the next couple of weeks for this team to be a true title contender.

There isn't a player in the Big East who can match T-Will when it comes to pure athleticism, but Weyinki Efejuku is about as close as you can get. He went right around Williams for an uncontested one-hand slam in the first half, a feat not many can boast about honestly.

Geoff McDermott is soft. Apparently that interview with Marvin Barnes did little to inspire.

Providence has a lot of veteran talent and I do think Keno Davis is a hell of a coach, but there were just too many bad habits still floating around from the Tim Welsh-era for this team to be a true contender.

Davis will get the program back on track, and guiding this group to the dance would be a tremendous first step.

We talked before the season about how a really good team could easily go 11-7 or 10-8 in this conference, well, Louisville has 11 wins with five games still remaining on the league slate.

Not that there's anybody among us who doesn't want more, but this group has already accomplished a great deal, and it's put itself in a position to accomplish something tremendous.

I know the rivalry hasn't been what it was since both made the move to the Big East, but Saturday is still Louisville/Cincinnati, and it's still something that means more than just another mid-February conference game both teams would love to have.