I'm old. I don't beat around the bush when it comes to post titles anymore.

There won't be a recap for the Charlotte game because there are a limited number of ways to say it sucked and I have no idea whether it was a fluke or indicative of the season that lies ahead.

Maybe we do win with Peyton, Preston and Jerry at 100%, but wasn't much of this team's strength supposed to be in its frontcourt? Weren't Samuels and Jennings supposed to be one of, if not the, top big men tandems in the Big East? To my knowledge those guys are both performing at full strength and Louisville was absolutely dominated in the paint by a team that starts three guards and a pair of forwards who stand 6-6 and 6-8, respectively. Still, the Cards were outrebounded 49-34 and 49er forward Chris Braswell, a freshman, dominated the game by snatching 14 rebounds, hitting 9-of-12 shots and finishing with 21 points.

There's no question that Samardo Samuels' start has been, to put it mildly, a disappointment, but what about Jennings? Does anyone think he improved significantly over the summer? You don't find your way into Rick Pitino's dog house by accident. I understand that his natural ability demands playing time and that it's possible that we're the best we can be when he's on the floor, but if he'd gone about things the way he should've during the offseason then this wouldn't be an issue.

Our big men need to do a lot of growing if we want to be comfortably away from the bubble by mid-February.

I think the most positive thing I heard about Saturday's game was that Preston Knowles was getting into people's faces during breaks in the action. Somebody has to.

INTERNET REPORT ALERT: I've received word that U of L is planning a large press conference for 4 p.m. tomorrow at the Brown & Williamson Club. Have not been able to confirm what it's for, so I'm not going to speculate, but I absolutely invite you to do so.

The first year in the NBA is hard for a lot of guys, but it appears Terrence Williams is having a particularly difficult time with the adjustment. He's already lost nearly as many games as he did in his college career, he's connected on just 14 of his last 44 shot attempts, he's seen his playing time slowly dwindle and now he's taking shots at his coaches and fans on Twitter.

@MMEIZINGER send me the story where I said I play like lebron,btw you look like nothing – 20 hours ago

Don’t get me WRONG I thank GOD everyday for where I’am and I love it, hardest working when others aint watching an imma get MY game back – 10 hours ago


Its funny u fake fans an fake coaches take what I say the wrong way, I love my team an team mates we are human an hate losing point blank – 7 hours ago

In better news, T-Will will be holding an autograph session at 8 p.m. on Thursday at Angio's on Bardstown Rd.

ADMM has asked me to let everyone know that he's OK, but he refuses to give anyone his current location. Just let him be....just let him be.

Les Miles voted Cincinnati 8th in his final coaches' poll ballot. I guess he was just that impressed with Texas' clock-management. He also put two-loss Oregon one-spot ahead of an undefeated Boise State team which manhandled the Ducks a couple months ago.

Check out all the ridiculousness right here. 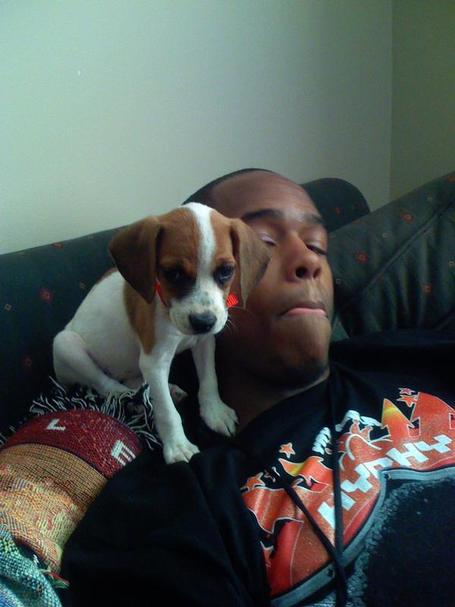 Cincinnati/Florida is the only BCS game I will watch. It's not because I'm trying to make a statement - although, I do think it's going to take a dramatic decrease in ticket sales and television ratings for anything to change - I just couldn't care less about any of the other games on the docket.

It's gotten to the point where I simply can't talk about college football's postseason anywhere near serenely. It's like debating the issue of two plus two equaling four.

Here's hoping the good guys figure out some things over the course of this work week, because Saturday's game against Western Carolina won't be a walk. The Catamounts are 8-1, own a victory over Duquesne and their only loss came at No. 2 Texas.

Don't let anyone ever tell you that a non-season-ending game is a "must win," but another Cardinal loss before the Kentucky game would bring about an onslaught of "is the Pitino scandal affecting Louisville" stories, which would just make everything that much harder on this group.

We all know about it taking a while for guys to fully grasp the Rick Pitino scheme and philosophy, but this team needs to win and needs to keep winning until Jan. 2.

What's amazing to me watching this year's Cards is how unathletic the squad looks. Saturday's game certainly appeared to be a Big East/C-USA matchup, only, you know.

The Cards aren't quick with the ball, they're not quick to the ball, they struggle to keep their guy in front of them when playing man and very few of them appear capable (or willing) of skying over people to impressively snatch a rebound. The bad news is there's no remedy for this.

I still think we have the potential to compete for a top four spot in the Big East and a decent seed in the Big Dance, we just have a lot farther to go than I thought we did a few months ago.

Do your thing, coach.