'05 Louisiana-Lafayette victory a huge one for Pitino

Share All sharing options for: '05 Louisiana-Lafayette victory a huge one for Pitino

Like most mid-majors who come to Louisville for a non-conference tussle in December, history will not be on the side of Louisiana-Lafayette Wednesday night. The Ragin' Cajuns have faced the Cardinals seven times and lost seven times, with five of those defeats coming inside the vaunted walls of Freedom Hall.

A program winless against U of L doesn't demand much space in the collective mind of the Cardinal fan base, but a little under five years ago Lafayette was just a couple of shots away from drastically altering the current perception of both Louisville basketball and the man who leads it.

When the topic of the 2005 Final Four run comes up, invariably U of L fans will bring up the West Virginia miracle comeback first, then move on to the dismantlings of Georgia Tech and top seed Washington, and then finally they'll discuss the loss in the national semifinals to eventual runner-up Illinois. What's rarely discussed and seems to be largely forgotten is that the Cards were nearly one-and-done for the second time in as many years.

Still fuming from a perceived seeding slight by the NCAA Tournament Selection Committee, Louisville, ranked No. 3 in the country but remarkably seeded fourth in the West, nearly proved their critics correct in their big dance opener.

Louisiana-Lafayette, the 13th-seeded champions of the Sun Belt, withstood a barrage of early Francisco Garcia threes and trailed the Cards by just a point at intermission. Led by future NBA Draft pick Tiras Wade, the Ragin' Cajuns would later go on a 15-8 run and take a four-point lead with under ten minutes play. They held a one-point advantage with under four minutes to go and had a chance to tie the game in the final minute, but perfection from Garcia at the free-throw line (7-for-7) ultimately put the upset out of reach. 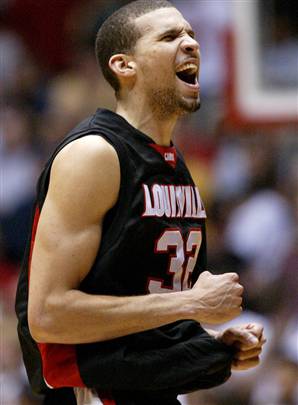 In hindsight, it's a victory Pitino ought to cherish.

Let's look at how the head coach's legacy is altered if the Cajuns knock down just a couple more jumpers on that evening:

--No more talk of being the only coach to take three different programs to the Final Four.

--Each of Pitino's first three NCAA Tournament losses would have come against non-BCS conference teams, and two of them would have come at the hands of double-digit seeds (No. 12 Butler upset Louisville in '04).

--Even now, after back-to-back Elite 8 losses, there would be considerable talk about Pitino never being able to get over the hump at U of L.

It's amazing how one or two 40-minute games in late March can completely shape the legacy of a head basketball coach. We aren't that far removed from a time when the knock on Roy Williams was that he'd "never be able to win the big one." Hell, I vividly remember hearing a man say "well they'll hang 'em if he loses this one" in reference to Pitino when Kentucky trailed San Jose State late in the first half of their opening contest in the '96 tournament.

It's a strange, strange game.