There's not a great deal to be said that hasn't already been covered at this point. Saturday was easily the most complete and encouraging performance this group has given to date.

The fact that it came against a team that was unexpectedly forced to suit up without one of their top players sullied it just a tad, but Western doesn't come close to beating the Louisville team that showed up on Saturday even with a completely healthy Sergio Kerusch.

It was nice to see everyone smiling and cutting lose after what has definitely been a difficult couple of weeks. The chemistry this team possesses makes it particularly easy to support. It isn't hard to see just how much these guys care about each other and how much they want one another to succeed.

Still, you have to hope everyone's aware that one excellent performance doesn't erase what happened against Western Carolina and Charlotte, and that these guys have a pretty large hole to dig themselves out of. There's still a significant amount of work to be done.

Something that was said to him over the course of the past week apparently got through to Samardo. For the first time in 13 or 14 months he actually looked happy to be playing the game of basketball. He smiled, he rebounded, he attacked the rim and he went nuts when his teammates made plays. It was the Samardo Samuels Louisville has to have to be any sort of player in the Big East this year.

I'm not 100% sure, but it looked like at one point in the game you could see him say "I'm back" as he was walking off the floor. Very encouraging. 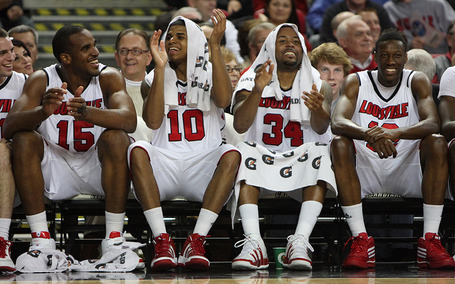 I'm not going to say anything else because I don't want to taint whatever mojo he's got working in his favor.

It looks like this is the rotation Pitino has settled on. So far, so good, but thoughts of Swop playing 25 minutes against Connecticut, Georgetown, West Virginia, etc. are giving me night terrors.

With extra minutes sent their way, I thought Reggie Delk and Kyle Kuric were both terrific, the latter in particular. Both guys can defend, both can hit the outside shot with some degree of consistency, both can help out on the glass (especially Kuric) and both are more capable of creating shots for other other guys than anyone on the team outside of the point guards.

It wasn't TJ's best overall performance, but all of the sudden he's become a guy who you know is going to give an extreme effort night in, night out. He runs the floor exceptionally well and he's really become a battler in the paint for position both when he wants the ball and when a shot is in the air.

There are some people who just can't bring it in practice. They really do try, but in their subconscious they know that it's not as important as an actual game and therefore their effort and demeanor simply aren't at the level they are when the stadium's full and a notch in the win column is on the line. You have to assume this is the case with Jennings.

Chris Brickley levitating at some point during the game is just about the only thing I would have assigned worse odds to than Samardo Samuels cramming a poorly-thrown alley-oop in mid-air with his left hand.

Speaking of Brickley, he may be the most loved walk-on (by his teammates) in the history of Louisville basketball. The team had obviously planned to not celebrate at all if he scored a point, and the bench reaction, or lack thereof, when he netted the first of his two buckets was priceless. Of course about 30 seconds later I was worried that Sosa and Smith were going to break an ankle and have a heart attack at the same time due to their celebration. It's pretty cool to see.

The official who bumped McDonald ought to be suspended. That's a rule that has to work both ways. If you're going to throw the book at players and coaches who make any sort of intentional contact with a ref, then you have to do the same to a stripe who goes out of his way to get in the face of someone else during a game.

Mike Marra's going to be pretty good. I'm telling you. Give it a year or so.

I think you're starting to see the ill-effects of not setting the world on fire as a freshman get to Peyton Siva just a bit. He's never a guy who's going to openly pout or give a half-assed effort because he doesn't think he's getting enough playing time, but consistently playing less than 20 minutes and scoring in single figures is going to take its toll on any kid who had been THE guy on his team for his entire life up until this point.

Don't get me wrong, I think Peyton's 100% aware and OK with the fact that this is Edgar Sosa's year to run the show, but being that mature doesn't automatically make stomaching such a drastic transition any easier.

All that said, how many former McDonald's All-Americans averaging just over 13 minutes a game do you see behaving like this on the bench? 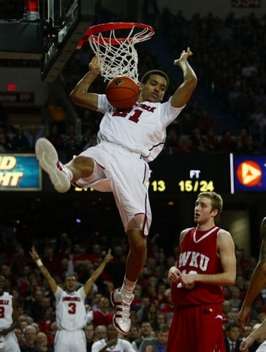 He's absolutely going to be a star here.

Stephen Van Treese's inbound turnover to minutes played ratio might be the worst in the history of college basketball.

If you missed any of the game, here's a really well put together highlight video.