Morning (Strong) coffee: The day after

Share All sharing options for: Morning (Strong) coffee: The day after

It's happening. THE PUNS ARE HAPPENING.

1. A fantastic day for Louisville football yesterday as I'm not sure the introduction of Charlie Strong as head football coach could have gone any better. He came off as extremely genuine and showed significant emotion, something we'd grown unaccustomed to over the past three years. 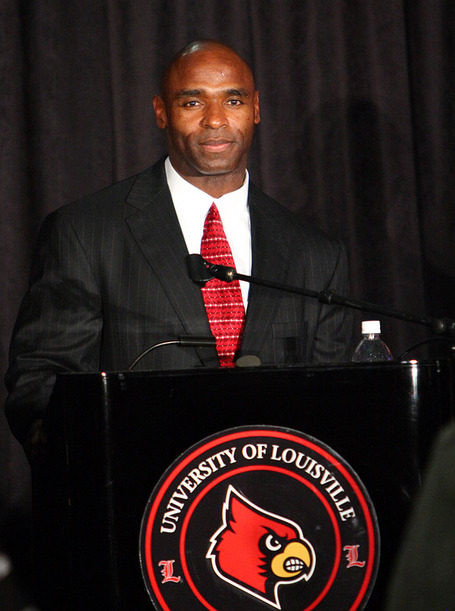 If you missed or want to relive the panty-dropping magic that was yesterday's press conference, you can watch or listen to it right here.

2. The Courier has a copy of Strong's contract, which will pay him $1.6M a year, about what Bobby Petrino was making before he bolted for a three-week stint in the NFL.

It's worth noting that if Strong leads the Cards to a BCS bowl he will receive a $100,000 bonus, while if he leads them to the BCS National Title game he gets just $50,000. To make up the difference I'm willing to offer up my soul. It's still got a little value left. Yes it does, mom.

3. Teams with Strong on their coaching staff are 19-1 against Kentucky.

If he can find a way to beat the Cats in his debut, in front of a packed house in the newly expanded stadium, I'll create a dance in his honor. Odds of it involving pants: 0:0.

4. The biggest issue now becomes who Strong will bring in to make up his staff.

As far as offensive coordinator goes, Billy Gonzales is out and I'm still hearing that the No. 1 candidate is now former Florida QB and current Jacksonville head coach Kerwin Bell. Yes, that Kerwin Bell. Bell is 18-16 in three seasons at JU, and the Dolphins are averaging 32 points per game this year.

Also worth noting is that in addition to he who shall not be named, the only coach who has been removed from the roster on UofLSports.com is defensive coordinator Brent Guy. As miserable as this season was, I thought Guy actually did a highly commendable job with the situation he was handed and I wish him nothing but the best wherever he lands.

Watching him take the game over last night, I kept busting out the lines by the cocky leader of the team with uniforms from The Sandlot. "It's pretty easy when you play with a bunch of rejects and a fat kid, hey John. Except for Wall, you're all an insult to the game."

Nobody laughed, but they were female UK fans - who, as we all know, don't count - so I didn't think twice about continuing. For the record, female U of L fans are god's gift to the world and absolutely do count. Female U of L fans who read Card Chronicle count five times as much and will bear children who will someday bring about world peace and multiple Cardinal national championships. Thank you for being who you are.

6. I'm getting really worried about this Western Carolina game. The Catamounts are a legit contender for the DavidsonCon SoCon title and if they come into Freedom Hall and spring the upset then the Cards are automatically thrust back into the national spotlight for all the wrong reasons.

I know we usually wait until sometime in early January for this, but we need to go ahead and get the train properly on the tracks this Saturday.

7. Things aren't getting any better for T-Will in Jersey. Turns out his benching Tuesday night wasn't because of his dubious Twittering, but because he stayed out late Monday night and missed the team bus the next day.

The rookie wing missed the bus to the morning shootaround Tuesday, which carries an automatic fine and – as most coaches play it with rookies – a benching that night.

But just as relevant, the team learned that Williams stayed out very late Monday night – and that’s why assistant coach Doug Overton made the executive decision to test Williams by having him run the United Center steps, according to two officials who required anonymity because they are not authorized to speak for the team.

"So they decided to put him on ice," one of the officials said. "Now let’s see if he gets the message."

I realize that the situation with the Nets sucks, but T-Will's got to understand that he's being paid millions of dollars and his job is playing a game. Suck it up, enjoy being rich and understand that things are going to get better. Also, if you want out of Jersey that bad, you're not doing a real good job of marketing yourself for other franchises.

I still love you.

8. Reminder: There will be a T-Will autograph session this evening at 8 p.m. at Angio's on Bradstown Rd.

Mike Rutherford of CardChronicle.com and University of Dayton intramural basketball fame might very well be making an appearance.

Charlie Strong: had a great time at the press conference, thank you too all of the fans who came out and supported me and my family. Down to the waterfront for the banquet, go cards!

Yep, after six years of pretty persistent bashing, I bit the bullet and got on Facebook. My next move: purchasing a camera phone and starting to watch The Office. Predictably, I've taken a lot of heat for the move, but receiving an email saying Charlie Strong has confirmed me as a friend is the moment that made it all worthwhile. 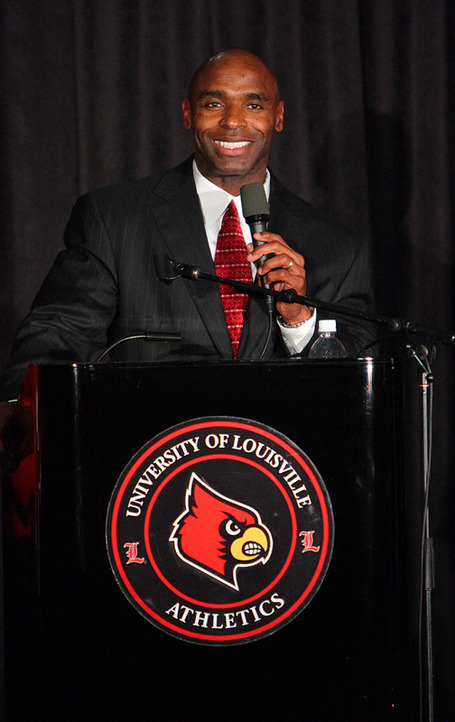