An abbreviated tour of the Louisville sports world

Share All sharing options for: An abbreviated tour of the Louisville sports world

Well, I think it's safe to say that was as eventful a U of L sports weekend as we've seen in quite some time.

Each of these (with the exception of No. 3) demands and will receive additional attention, but for now, let's quickly peruse the topics dominating the Louisville sports world.

1. Is anybody really that concerned about the loss to UNLV? The Louisville basketball team is every bit as likely to lose in November as the Detroit Lions are, and I think we've finally reached the point where Cardinal fans have accepted it as an inevitability.

Last year's eventual No. 1 overall NCAA Tournament seed also lost over Thanksgiving weekend: to Western Kentucky, on a neutral floor, by 14. That same squad also fell to a much weaker UNLV team, playing without its best player, in Freedom Hall.

I'm not saying this year's group of Cards has the potential to achieve the things last year's did, I'm just saying that this is what Pitino's recent teams do. Their weaknesses are exposed early, the players gradually figure out how to fix them, and Louisville is playing some of the best basketball in the country come February and March.

Obviously, this team right now has major problems, but the past tells us that eventually they'll play to their potential. How great their potential is is the larger question.

2. All signs continue to point to Florida defensive coordinator Charlie Strong as the top candidate to replace Steve Kragthorpe. First, you've got Strong saying over the weekend that he's focused on playing Alabama for the SEC championship, but also "if they hire me, they hire me" - which is about as direct of an admittance of interest as you're going to get from a coordinator whose team is vying for a national championship - and now you have Urban Meyer basically touting Strong for the job.

My thought: Strong is exactly what Louisville needs. He's going to recruit the hell out of the state of Florida, the place where U of L laid its foundation for success before the Kragthorpe era. He's the top assistant to a man who's on pace to finish as one of the most successful coaches in college football history. And he's going to bring with him an air of confidence that this program desperately needs. 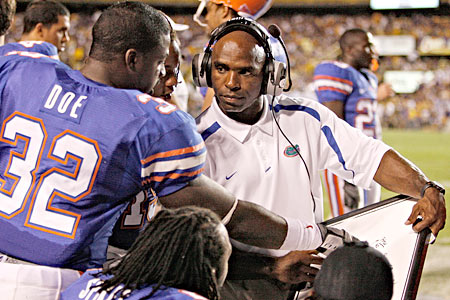 3. Lots of talk this morning about Kentucky basketball players stomping on the Cardinal logo during yesterday's open practice at Freedom Hall. Despite the fact that they'd quickly label the pope a "thug" if he did the same thing at Rupp, I'm positive that Big Blue fans will write this off as a sign of the program having its swagger back or something like that.

Do I think this was in poor taste? Sure, but this is what Calipari-coached teams do (hi, Darius). We all expected this type of stuff when Kentucky hired Calipari, and honestly, it's fantastic for the rivalry. Admit it, you haven't wanted to beat UK this much in a long time.

When asked if he thought the actions would incite the Louisville players, Patrick Patterson reportedly responded, "If it does, it does; if it doesn't, it doesn't. That's entirely on them."

Of course you can't blame Patrick. If I'd had my shot blocked 79 times in my only two appearances - both losses - against my program's biggest rival, I'd probably try and act like stomping on their logo in front of only my fans and teammates proved something too.

Tears and cliches will both flow like a glorious dream.