Our Short, Regional Nightmare is Over: Kragthorpe Out as Coach

Share All sharing options for: Our Short, Regional Nightmare is Over: Kragthorpe Out as Coach

What started as very early morning message board rumors, picked up steam at approximately 10:33 AM when Pat Forde joined the crew on Gameday for an announcement, and became basically official with multiple reports (ESPN.com, LSR, ITV), is the biggest news of the season, a sentence many of us have been waiting to write, read, say aloud, text or even Tweet: Steve Kragthorpe is no longer the coach of the University of Louisville football team.  A noon news conference will make it official.

So now the waiting starts.  Will Jurich name a successor today or go through a long search process?  With many of the top targets tied up through conference championship and possible BCS games, it may be awhile. 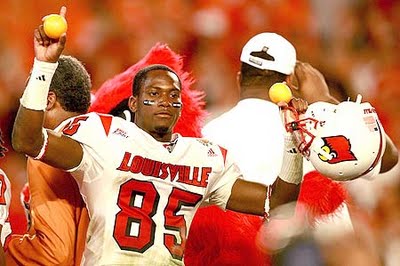 But that is a worry for another day.  For today?  Go find some oranges and hold them up to the sky, baby.  And know that somewhere, a guy that looks like Will Stein but is actually a blogger will be running through the streets of his hometown without his pants on.  If you want to combine those two methods of celebration, no matter where you are, the staff here at CardChronicle won't judge. You've earned it.