Share All sharing options for: Quick Thoughts On Game, Krag

First, some "breaking" news - in a move that surprises no one (I think Mike called this weeks ago), Adam Froman will be starting at QB tomorrow night, according to Kragthorpe's Twitter.   Obviously Froman was who Krag wanted, he got hurt, Burke started, and then Kragthorpe was all like, "uh, Burke's a little banged up" despite him playing the entire game at Utah and despite Froman noticeably limping the entire second half.  Anyway, glad everyone got to know Justin Burke so well, I think it's safe to assume it will be awhile before Burke is back on the field while Krag is the coach and Froman is not too badly injured.

Second, you know you are a UofL fan first and a college football fan second still when you don't think twice about going to the USM-UL game tomorrow night on what promises to be a cold night (lows in the 40s) despite the fact the Florida-LSU game is on at the same time.  And if you just read that, have tickets and thought, wait, same time?  Ugh, what am I going to do?  Well....I empathize with you.  But I'm going to the game, with really only a brief moment's hesitation.  Also a CardChron reader (who shall remain nameless so people don't take their annoyance with CardsFan922 on him) gave me his tickets so that would be a pretty uncool move staying home, in the comfort of my own entertainment room, switching back and forth between our game and LSU-Florida, warm, able to follow the Open Thread.....but seriously, the game will be awesome.

I am excited to go mainly for the 1% chance that they announce Kragthorpe's resignation (effective at the end of the season) or immediate departure at halftime or after the game.  Actually, I'm reallllllllllly excited for the .01% chance that they have the cheerleader guy who screams into the mic a prepared statement from Kragthorpe thanking the fans, Jurich and saying that it is time to move on.  Like that guy or hate him I can't imagine a funnier thing in this world.  "LADIES AND GENTLEMEN!!!!" he would scream.  "IT IS WITH GREAT SADNESS!!"  "THAT I MUST RESIGN MY POSITION AS HEAD COACH!!"   "OF THE UNIVERSITY OF LOUISVILLE FOOTBALL TEAM!!!"  "I WOULD LIKE TO THANK MY FRIEND TOM JURICH!!!"  "PRESIDENT JAMES RAMSEYYY!!!"  "THE COACHING STAFF AND STAFF OF THE ATHLETIC DEPARTMENT!!!!"  "FOR THEIR SUPPORT, HARDWORK, AND FRIENDSHIP!!!"  "OVER THESE LAST THREE SEASONS!!!"   "WHILE SUCCESS ON THE FIELD IS IMPORTANT!!!!"  "I HAVE NO REGRET ABOUT THE SUCCESS WE HAVE HAD OFF THE FIELD!!!"  "I LOOK AT MY JOB!!!"  "AS TO TURN THESE YOUNG MEN INTO MORE THAN JUST!!"   "GOOD FOOTBALL PLAYERS!!!"  "BUT GOOD PEOPLE TOO!!!"  "MY FAMILY AND I HAVE ENJOYED!!!"  "OUR TIME IN LOUISVILLE!!!!"  "AND I LOOK FORWARD!!!"  "TO THE MANY CHALLENGES AHEAD!!"

I don't know why, but the thought of that guy screaming in his raspy voice a PR-sounding, bland prepared statement at the top of his lungs, turning to both sides of the stadium every few words, just really makes me laugh. 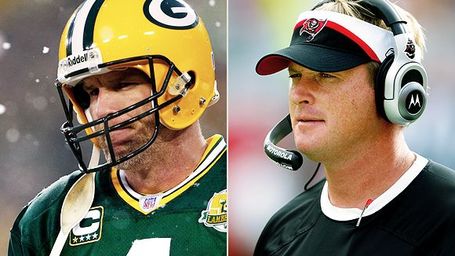 via a.espncdn.com   Both of these men will be on the minds of many tomorrow night.

From a football standpoint, the CJ said this week that Vic would get the ball more, and USM had a bad run defense.  They also said that USM's backup QB has a cannon.  So I think it is safe to say that we will be running the ball and USM will be throwing downfield.  And we are two point UNDERDOGS at home to a middle of the pack CUSA team.  Ugh.

Finally, there have been so many rumors, and there have been too many, from people who are generally reliable and known to have connections to the athletic department, and everyone seems to have heard the same thing.  Until I see it with my own eyes, I'm convinced the guy will be here until the entire season just because it doesn't make sense to fire him mid-season because logistically, who would be the offensive coordinator?  And Jurich is too close to the guy and has his reputation too much tied up with Krag's fate to just kick him to the curb in the middle of the season, especially if he beats Southern Miss, because it would seem like he's basically admitted he was wrong to even bring him back.  And I'm not so sure if Gruden is the long term answer or even a possibility (or if UK fans have a response to "Parcells to UK" jokes), but he would certainly put us back on the map INSTANTLY and at least early on would be able to tell recruits, I can get you to the National Football League.  Can he win games in college?  Who knows.  Would he be our Wannstache?  That's a scary thought.  Would I be f'in pumped about UofL football again?  Pumped enough to not think twice about going to a cold, rainy night game instead of staying home to watch two top 5 teams play in the Game of the Century.  No doubt about it.

So who else is going to the game?  Anyone turned down tickets to stay home and watch LSU-Florida?  And does anyone else think that screaming cheerleader guy has virtually no effect on the crowd's excitement, and is possibly detrimental?  But also likes his enthusiasm and thinks there has to be a better way to channel that enthusiasm?  Tell us about it in the comments.