Jeff Jagodzinski is a candidate for the Louisville job

Share All sharing options for: Jeff Jagodzinski is a candidate for the Louisville job

A source has told Card Chronicle that third parties between Jagodzinski and U of L are "feeling each other out," a statement a second source confirmed.

I'm rarely the bearer of inside news and when I am I'm generally not at liberty to share it with the world, but on the few occasions CC has reported "breaking news" (or whatever this is) we've been right. Just a mini-disclaimer that I always feels needs to be present somewhere in posts like this. 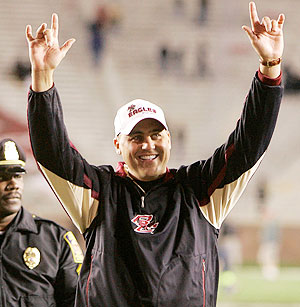 In his first year at Boston College, Jagodzinski led the Eagles to an 11-3 record, a bowl victory, a #10 finish in the polls and an ACC Atlantic Division Championship. At one point in the season the Eagles were ranked second in the BCS standings.

Following the 2008 season he interviewed for the vacant New York Jets head coaching position despite being warned by BC athletic director Gene DeFelippo not to. The Jets ultimately hired Rex Ryan and DeFelippo fired Jagodzinski.

Jagodzinski was hired as the offensive coordinator for the Tampa Bay Bucaneers in January, but was dismissed by the organization before the start of the 2009 season.

I didn't think this stuff would be starting this early, but here we are.