Outside of the home team's spotty outside shooting, Wednesday night was just about everything I expected. Samardo Samuels dominated in the paint against an undersized NAIA team, the Cards made careless decisions with the ball, they committed a lot of reach fouls because they were out of position defensively, but ultimately they found the run they needed in the second half to secure a double-digit victory.

If the last few seasons of Pitino ball have taught us anything it's that analyzing these games too closely is pretty much pointless.

And yet we proceed...

Pitino has stated multiple times that this team has a ways to go defensively - and that was obvious Wednesday night - but what really concerns me about this group offensively is its lack of quickness and playmakers. Louisville has a handful of guys who can hit the outside shot consistently, but just one or two who can create space by themselves to get that shot up.

The lone exception is Peyton Siva, who looked amazingly quick and had no problem getting into the lane and creating shots for teammates. It's no coincidence that he was the catalyst for the second half run that put the contest out-of-reach.

Siva's going to be a bit turnover prone and vulnerable to getting over-excited, but his playmaking ability and leadership qualities were both on full display in his Cardinal debut. When he exited the game for the final time, he was so intense that Samardo Samuels and Preston Knowles couldn't help but laugh.

The kid will leave here as one of the most beloved Cardinals of all-time. 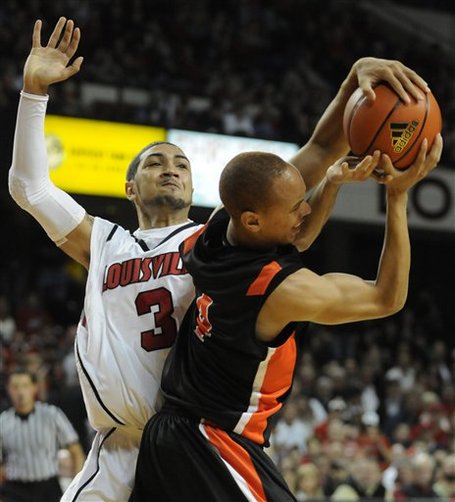 You could almost hear Edgar Sosa thinking, "here we go again" when Siva received his final ovation from the crowd.

Still, I think this is good for Edgar. Either he steps up, busts his ass and becomes the true leader and floor general this team needs or he rides the pine and watches a freshman run the show in crunch time.

The next few months will decide whether or not he's remembered for more than just a made shot against Kentucky and a couple of missed shots against Texas A&M.

Jared Swopshire definitely deserves praise for hitting the weights in the offseason, but on Wednesday he again looked capable of doing little more than taking up space and snatching uncontested rebounds. Whenever he touches the ball on offense his main concern appears to be completing a simple pass to someone nearby.

I do think he has the potential to be a quality Big East forward, I'm just not sure it's his time yet.

To state the obvious, Kyle Kuric is light years ahead of where he was 12 months ago. I'd be very surprised if he doesn't start against Bellarmine, but even if he performs as well as he did Wednesday night, it will do little to shed light on the issue of whether or not he can hang against Big East quality competition.

It's getting worse and worse.

Worst comment overheard during the game: "Kuric seems like a kid I would meet at a wedding and just get hammered with. I don't know whether that's cool or gay."

Fatherhood has done little to diminish Jerry Smith's affinity for the personal foul.

I, for one, am surprised.

We've got a ways to go, but it's going to be hard to best former PRP star Vincent Crutcher for the title of biggest tool on an opposing team. Thinking your Charles Barkley while playing for an NAIA school is no way to go through life, son. Hope you remember that Samardo chest bump.

Terrence Jennings is deep, deep, deep in the dog house to begin his sophomore season. He's really taking the whole Earl Clark imitation act to heart. If he gets suspended for the UK game things will hit Single White Female status.

I found the pregame video a bit underwhelming, but I suppose it will be edited and added to as the season wears on.

Also, given, um, some of the issues that came up during the offseason, I'm not sure if Pitbull's "Hotel Room Service" was the perfect choice for intro music. But whatever, you can clap to it, the kids enjoy it, I get it.

I was a senior at Trinity when the Saxton twins were sophomores. Even though I had a handful of close friends in my class who played basketball, Kyle Saxton was easily my favorite player on the team. I nicknamed him "BTB" because of his amazing behind-the-back move, and the name quickly caught on. One time he was benched for dribbling behind-the-back with no one around him in an effort to appease the wishes of the student section. It was awesome.

Anyway, even though I gave him this nickname and he acknowledged my shouts of praise when he was on the court, I was still star-struck when I saw him during school. Our lockers were literally right next to each other and not until the district tournament came around could I work up the nerve to spit out a "good luck, BTB."

I don't really have anywhere else to go with this other than to say that he scored eight points, is awesome and still intimidates me.

I think these are my favorite uniforms in a long time, which is saying something because I've liked every year's rags since the infamous "ass rainbow" NIT season. That said, I'm not sold on the warm-ups.

Chris Smith was rocking some serious bling, but he needs to step his sartorial style up significantly if he wants to bring home the coveted honor of "best dressed player in street clothes." Richie Phares is comin' hard.

Love the idea of honoring a past former Card great on the ticket of each home game. Still, if I'm Jim Price I'm pissed I get Georgetown.

I honestly don't think I could have felt more at peace or more at home Wednesday night.

It's basketball season in Louisville.