Kragstacholypse Now: It Will Be Televised?

Share All sharing options for: Kragstacholypse Now: It Will Be Televised?

Let's say you are a college football fan who just LIVES for Saturday.  On Monday and Tuesday, Saturday seems an eternity away.  By Wednesday you are starting to see the Thursday night lights at the end of the tunnel.  Sure, these days its usually ACC football, but Thursday night event viewing college football is now a staple for most fans.  Friday morning comes, and you can barely contain yourself.  Well, my friend (we're still cool, right?), there's good news and there's some bad news for you....the good news is that when you get home after a long day of work, you complete your nightly routine of Friends and Seinfeld reruns on TBS (and think, wait, people used to think Friends was funny and revolutionary?), finish your low-carb meal or Taco Bell, and check out what's on ESPN, your heart will skip a beat: IT'S COLLEGE FOOTBALL!  ON FRIDAY NIGHT!  TWO BCS SCHOOLS IN A PIVOTAL CONFERENCE SHOWDOWN! 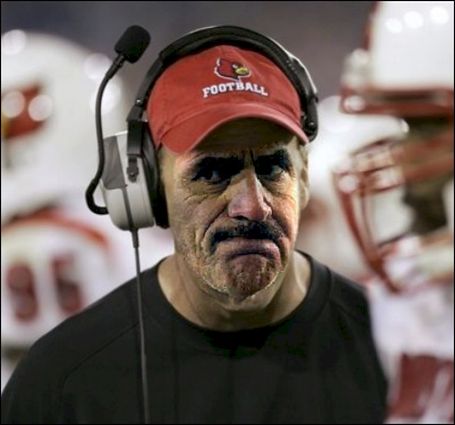 That's right.  Thanks to DocCardsFan, the Kragstache will haunt your dreams.

Louisville - Pitt hasn't exactly been appointment viewing since we joined the Big East.  In 2005, the teams traded touchdowns in the first 25 seconds when Pitt fumbled the kick-off into the endzone and then returned the ensuing kickoff for a touchdown.  The teams combined for six field goals, Michael Bush had two TDs and Kolby Smith added a late TD for a 42-20 win.  This would prove to be the best game of the series.

In 2006, Pitt's brilliant strategy of Palko throwing the ball immediately to the WR for a quick gain was foiled by William Gay's coolest interception ever (remember the fake CB blitz where Palko just stepped back and threw it right to Gay?) and a 48-24 beatdown that was mostly boring for us fans, spoiled by great football and disappointed with a 10-1 record.  If only we knew.

Anyway, 2007 was the first Kragstacholypse and ended as only Kragstacholypses could.  This game was not nationally televised and was in front of a sleepy PJCS early afternoon crowd.  The Cards came in 4-4 (1-2) and Pitt was carrying a stellar 3-4 (1-1) season on their sleeves.  The Cards, led by an efficient Brian Brohm and his 21-30, 2 TD performance, were ahead most of the game.  Pitt tied it up with a 12 play, 76 yard, 4:40 drive.  Brohm and the boys answered with a 7-play, 70 yard drive of their own to go ahead on a Brock Bolen TD, 24-17.  Backs against the wall, we answered, winning record, here we come!  Of course, LeSean McCoy ran Pitt down the field and Oderick Turner scored a TD - but wait he was down on the 1 yard line! Doesn't matter, they will score here and then win in OT, CardsFan922 said to himself.  But wait!  McCoy kragtastically fumbled on the next play trying to run it in from 1 yard out, the Cards recovered and got an unsatisfying victory.

Last year...ugh.  Pitt came out and dominated from the get-go, jumping out to a 20-0 lead before Cantwell got the Cards on the board with a TD pass to Troy Pascley.  Pascley would never be heard from again as he graduated and is playing in NFL Europe right now.  Wait, he's still on the team?  And hasn't seen any meaningful snaps this year but they are talking about putting the back-up QB in at WR?  That's Kragtastic!  Anyway, the defining play of this game was Cantwell's "swing pass" or totally predictable and terribly run screen that went backwards and was dropped by someone, I dunno who but frankly I don't care, and the linemen stood around while Pitt picked up the ball and ran it in 3 yards for a TD.  A Cantwell TAINT provided the final 41-7 margin, and there was only emptiness inside.

Ahh, memories.  So who is ready for more Kragstachopylpse tonight?  And who made the decision that THIS game would be the Friday night, nationally-televised manna for the starving college football fan universe?

And to make things worse, what does the CJ highlight as the key match-up tonight?  That would be Mike's favorite player, Byron Stingily, that's who:

Stingily is still finding his comfort zone after playing right tackle throughout his career.

"At left tackle you're on an island," he said. "You have to come prepared, ready to play and just be a technician."

The best part about that?  Who does he sound like with those quotes? Can't you just hear Kragthorpe saying those things instead of a) preparing him, b) getting him ready to play and c) teaching him how to be a technician?

So what's my prediction for tonight?  Terrible football, groans, boos, fleeting hope and ultimately a 10+ point victory for Pitt in a 30s - 20s type game.  Vic will get his and we'll get at least 2 touchdowns, but we won't be able to keep Pitt off the scoreboard.  Burke's first TAINT of the year seals it with 5 minutes to go.  Is it bad that's what I HOPE happens of the reasonable alternatives?  My biggest fear is that Pitt comes out pissed after losing last week and hangs 50 on us while their defense pressures Burke all day and keeps us to a meaningless late TD.  On national television.  As the only game.

Ugh.  Anyone have any prediction that will make me feel better?  Please, someone.