Share All sharing options for: What to read while the sound of a bouncing ball in an empty gymnasium gets louder and louder

Terrence Williams has been the subject of much hype in New Jersey during the months leading up to his rookie season in the NBA. He took the floor for the first time as a Net on Sunday and scored three points. He struggled a bit again on Tuesday, netting two points, committing four fouls and turning the ball over three times in a loss to the Celtics. 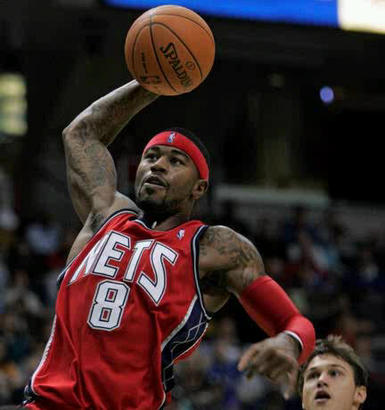 The world wide leader's Jay Bilas recently answered some questions for a newspaper in Arizona, and spoke candidly when the topic of Rick Pitino was brought up.

Louisville coach Rick Pitino also was in the news for the wrong reasons. He admitted to having an extramarital affair. The woman was charged with trying to extort him. How does Pitino get past this?

"It's kind of hard to assess because I look at so much of it as being self-inflicted. It's kind of like the Letterman thing. You don't want to minimize the potential criminal behavior involved on the part of the alleged blackmailer. But at the same time, the underlying conduct, you can't condone that. Can you imagine if that were a player that was accused of behaving that way in a restaurant after-hours? We'd be talking about a kid being suspended from school. I'm disappointed but at the same time you don't want to be over the top. It's Louisville's decision on how they're going to proceed. And I respect that."

Is this something that will disappear after a few wins or will this hang over Pitino for a while?

"I don't think it will ever go away. I don't think you'll ever be able to look at Rick the same way. I think it will be in the back of everyone's mind. It's unfortunate, but that's the way it is. This first year will be the hardest. As time goes on, it'll fade away and he'll be looked upon as how he proceeds. But this year, everywhere he goes he's going to get an earful. Maybe it will blow over. Who knows? Our attention spans are not particularly long. But it's going to come up as he gets into away games, and I can't imagine that it's not going to be addressed in sit-down interviews until the season really gets going. I don't know how much he can or will say, but the questions are going to get asked. I think just the whole thing is tawdry and unfortunate, and I'm sorry he has to go through the legal side of it. The personal side is bad enough."

The previews for the '09-10 Cardinals are really starting to stream in, and much of the focus is being placed on the new found maturity of senior point guard Edgar Sosa. ESPN's Andy Katz also honed in on Sosa recently, taking a look at the relationship between he and former Cardinal star Francisco Garcia.

Sosa is just 70 points shy of 1,000 in his career at Louisville. He has been a starter for most of his three seasons. But he has had his moments with Pitino. At one point, the coach challenged him about transferring. Pitino knows what buttons to push on players. So Sosa needed Garcia, since he understood Pitino better than most.

"I was trying to guide him through, because I know coach Pitino, I know the program," Garcia said. "I told him I would help him make it. Pitino is a tough coach. He wants to get the best out of his players. He's a big emotional coach and a great, great coach. He can get the best out of you. He did it with me every day, all day."

The communication between the two is constant.

"We became so close once I committed," Sosa said of the start of their relationship. "I always knew about him because we were from the same city, but since I committed we've been like brothers."

"I've been working so hard," Sosa said. "[Francisco] told me stories about how him and [former Louisville guard] Taquan Dean would sleep in the gym and use the [shooting] gun all night and never take rest. It's something that I've taken serious about my senior year. I want this to be the hardest year I've worked. I hope it pays off for me."

Garcia is confident it will. And if Sosa does produce in the manner in which he professes, he'll have a potential guide to deal with the anguish of playing professional basketball, regardless of the locale.

Speaking of Sosa, here's a shot of Highly Pleasant And Engaging Edgar and I in a passionate discussion about the controversy surrounding Guinea leader Moussa Dadis Camara while tailgating before the Pitt game. 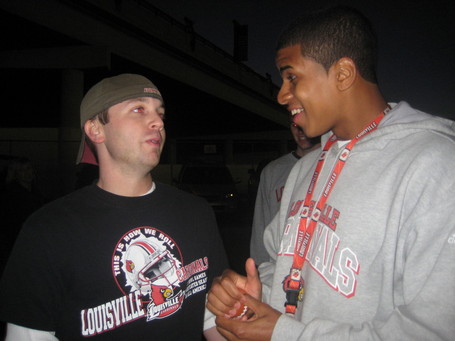 Either that or the UK game. Definitely one of those two.

He also posed for a shot with Ms. Card Chronicle, who completely botched her story about calling his game-winner against Kentucky. 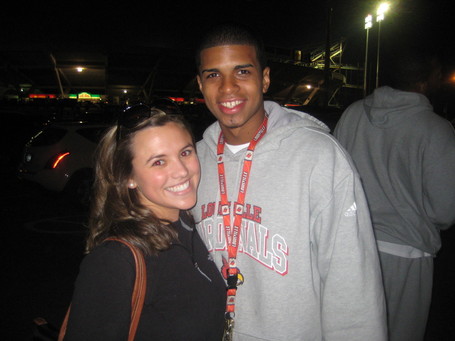 In case you missed the links earlier this week, both David Padgett and Will Scott have blogs.

We're about one Preston Knowles-authored site away from bloggers everywhere simultaneously emerging from their mothers' basements, hopping in their Chevy Cavaliers, rolling to the club bumping Ryan Adams and waltzing past the doorman and the 75 other "normies" waiting in line.

I have a friend who works with a guy whose wife's cousin's husband has a really good source who says Eric Crawford gets it.

Good news on the Downtown Arena front, where construction is reportedly one week ahead of schedule,

And finally, I think the past month and-a-half of football coupled with the approaching season and the growing distance of the Pitino scandal should have us all ready to fully appreciate the following.

I just watched the video and then read this write-up of the win over Villanova in the semis. I can't be sure, but I'm pretty sure when I was done I saw a winged Peck Hickman appear in the background of my lap top. He was smiling.