Let me start by saying that this was the first U of L/UK basketball game I've ever had the privilege of attending.

A win over Kentucky is indescribably sweet whether the final score reads 99-32 or 5-4, but for victory to come via an improbable shot in the closing seconds after an equally improbable sequence of events had raised the collective hopes of big blue nation sky high, well, it's just a smidgen sweeter.

Whether this one shot serves as the catalyst to a brilliant final two seasons or is just another high point in a consistently erratic four-year career, no one can take last night away from Edgar Sosa, and no one can erase the mark he made on one of the highest profile rivalries in college sports.

The Louisville Cardinals beat the Kentucky Wildcats in basketball. The sun shines for another calendar year.

We talked a little bit about it here after the Ole Miss game, but this team's complete lack of a killer instinct was on full display yet again last night. When the only thing left to do is let foot meet throat, this batch of Cardinals appears totally unwilling to finish the job.

When the lead hit 11, Swopshire and Goode took consecutive bad shots early in the possession, and a silly foul was committed on the other end each time. When Sosa's two free-throws pushed the lead to seven with just under a minute to play, the eventual hero, T-Will and Andre McGee all started high-fiving and laughing like the final horn had just sounded. And after Earl Clark fouled Jodie Meeks to give UK the chance to tie the game at 71, no one in white said a word, they just stared at the ground and looked absolutely terrified.

With the exception of a wild shot in the lane and an equally wild pass when he could have had a relatively easy bucket, this was about the most extended dose of Good Edgar we've seen since the second Marquette game last season.

My initial reaction to him jumping on the scorer's table and thumping his chest was that it was yet another sign of him not being able to handle success or failure in the proper manner, but upon further thought, I think it'd be silly to look too deeply into the actions of a 20-year-old who's been through a lot over the past three years and who just moments earlier had hit the biggest shot of his life. 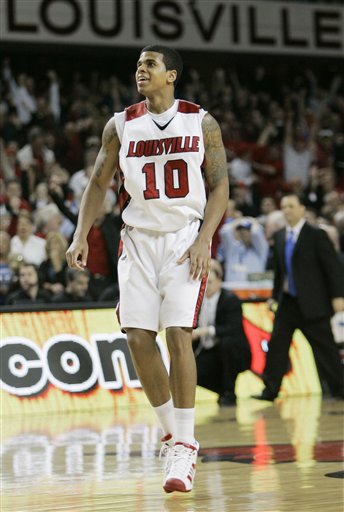 According to his head coach, Edgar's officially the man at the point now, which makes him - once again - perhaps the biggest key to or obstacle in the way of success for his team.

From this point on, I will never say anything when Terrence Williams pulls up from behind the arc. How someone can miss the rim by four feet and then stroke three triples in a row is just something I'm never going to understand, and I've accepted that. He hit big shot after big shot in the second half, pulled down a quiet eight rebounds and played stellar defense yet again.

It's time to lose the one-handed floater in the lane, though.

This team simply can't have this type of effort from Earl Clark every other night if it wants to win more than ten games in the Big East. His biggest problem right now is that when he catches the ball he freezes, giving his defender a chance to square up and other defenders a chance a to put themselves in a position to help if he chooses to drive. And when he catches the ball and doesn't freeze, he walks. Earl has to learn to catch and go without traveling. It's something he did consistently against Tennessee, but couldn't do two days later against North Carolina.

He's also a much better outside shooter when the pass is coming from the inside and he doesn't have to think about whether or not letting it fly is a good decision.

I was really disappointed that Samardo got into foul trouble because he made two of his better post moves this season during the limited time he did see on the floor. Even though he was going up against one of the better post players in the country, Samuels had to have been extremely relieved to not be seeing double and triple teams for the first time in over a month. He finally had some room to maneuver, and I would have like to have seen what he could have done had he played 30 or 35 minutes.

Louisville blocked seven shots, and I'm pretty sure six ended up in Patrick Patterson's hands for lay-ups or dunks.

Huge minutes from George Goode, who continues to be the most pleasant surprise of the season. The only two mistakes he made were the two shots he took, and you kind of almost felt like he earned the right to take them. He did a tremendous job on Patterson without help, and managed to play 22 minutes without turning the ball over. Him flying to the corner, stripping the ball from Stevenson and then finding T-Will for a three was an enormous momentum play.

The quality of play in this series has really been down over the last few years, but I thought this game was played at an unexpectedly high level. Maybe it was just because both teams shot the ball uncharacteristically well, but the game felt far more crisp than I had anticipated.

Easily Jerry Smith's best effort of the season. He did an exceptional job on Jodie Meeks when No. 23 was his assignment, and he proved that he does, in fact, still possess the ability to let the ball fly from his hands in the direction of the basket. You can make the contested shot, my man, go ahead and take it a few more times if you need proof. 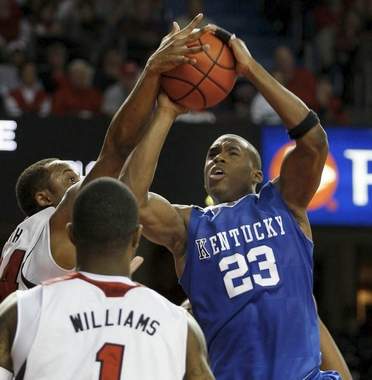 Also, Jerry going into one of his near-seizures while we were making a run in the second half and he was waiting to check in was pretty entertaining to watch. 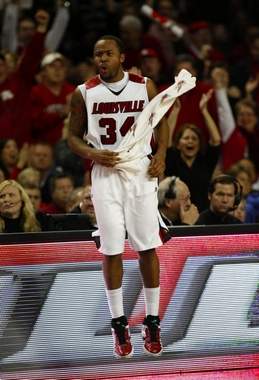 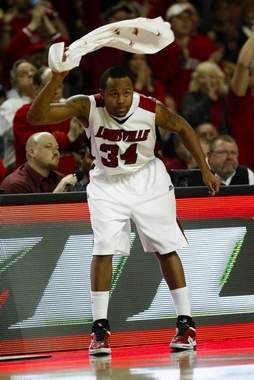 This is why you have to love Andre McGee:

"That's the Edgar Sosa that I know," said Andre McGee, the senior who shares time at point guard with Sosa. "He's a tough, confident player who can make all the plays. Everybody on this team believes in him. He just has to stop being so hard on himself."

The kid only cares about winning. He's not David Padgett, but he's the closest thing we have.

You couldn't have picked a worse time to pick up a T if you're Billy Gillispie. Your team has just taken its first lead in what feels like two years and then after you decide to, apparently, protest a play in which there was obviously no foul and your team actually ended up scoring, the other guys go on a 12-0 run.

Some very solid signs in the crowd, but "Pop, Lock and Swop it" gets my official nod.

Here's my runner-up in the middle: 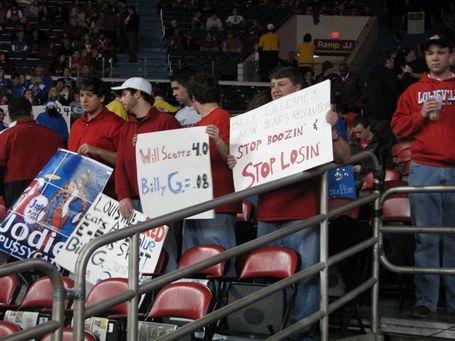 If you hadn't learned two years ago, when he's healthy, Jodie Meeks is a hell of a player. Regardless of what Patterson does, if Meeks stays the Cats will be tough in '08-'09.

I just don't understand how a pair of 240-pounders playing sumo wrestling in the lane doesn't warrant a whistle, but a hand on the hip of a 180-pound guard near midcourt does. Tim Higgins sucks. He's awful. Nobody came to see you. The fact that we know your name means you're not good at your job. Stop strutting, you're an assclown.

This was far and away the best performance by my man Michael Porter, which made me sort of proud. If you would have told me before the game that Porter would play 33 minutes and not turn the ball over once, I would have told you we were about to lose...handily.

The brother of a friend of mine said before the game that Sosa was going to be the "savior," a comment which was met with a mixture of eye rolls and half-smiles.

Jesse Mudd is a prophet.

I couldn't believe Preston Knowles entered the game and promptly allowed Meeks to stroke a pair of threes right in front of him. I also couldn't believe he air-balled a ten-foot jump shot. And I really couldn't believe that after all that he could still be the biggest bad ass in the history of the world.

Given the inordinate amount of playing time afforded to Jonathan Huffman two years ago and Josh Chichester last season, I said before the game that Kyle Kuric had better be ready for the night of his life. It was no Sosa as savior, but the three from the corner did make me feel pretty good.

An older, blue-clad fan sitting next to me gave me a high-five after the frenzy in the crowd settled down. Congratulations ma'am, you just earned Kentucky fans two points on the Card Chronicle scorecard, which brings their grand total to negative 15,667.

We won and I am happy.