Maybe it was the snow, maybe it was the fact that it was South Florida or maybe it was just that - for a change - you never really felt like the outcome was in doubt, but Wednesday night's game was sort of unexpectedly fun.

Seeing the team continue to roll, the players on the bench continually jumping around, guys like Jared Swopshire, Kyle Kuric and Reggie Delk have some success, and then being privy to the first Lee Steiden sighting of the season; it all made a win over USF feel better than it probably should have.

Put simply: it's far more enjoyable to follow this team than I ever thought possible seven weeks ago.

I'll be the first to call for his head if he attempts it in another single-digit game this season, but the T-Will between the legs pass to Earl Clark on the break was truly remarkable. 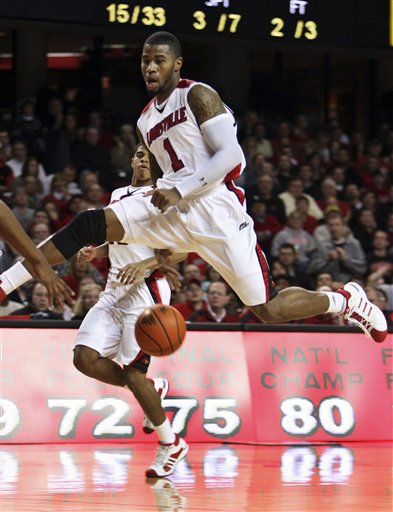 We might not have a player capable of doing the things Terrence Williams can do for quite some time, so my advice is to enjoy the show while you can.

Perhaps the most encouraging thing about last night's game was the way Williams responded after his so obviously inapt start.

When Rick Pitino politely told him at halftime that those types of shots were not to be attempted anymore, Williams reportedly responded: "I got you coach, I was dead wrong." And when Williams appeared determined to head to the hole early on in a second half possession, all it took was a "slow down, T-Will" from his head coach to make the senior co-captain pull the ball back out. The trip ended with an uncontested Edgar Sosa three-pointer from the corner.

The man has gotten the message, and his team is the hottest in the country because of it.

We may never have a player more willing to hug his teammates than Jerry Smith, and I couldn't love him more for it. The only thing more pleasant than Overly Excited Jerry is Unnecessarily Affectionate Jerry.

Also, Jerry, you and the mildly contested three-pointer could have a really great relationship. I'm telling you. I know she's not quite as sexy as the wide-open trey, but the girl can cook, clean and seamlessly carry on a meaningful conversation. Plus, her easy going family loves you.

Great to see George Goode back in action and looking like the lay-off is not going to have any seriously adverse effect on his game. It was nice to see him stroke those two free-throws, because being semi-reliable from the stripe could make him really valuable in a situation where Samuels has fouled out and having Jennings on the floor for any stretch of time is too risky.

Not a bad follow-up dunk, either.

Does anyone else get the feeling that Dominique Jones thinks he's just a tad bit better than he actually is? Don't get me wrong, Dominique, you're a solid player - you've definitely got me in a game of 1-on-1 or "Can You Dunk?" - but you're a solid player on the University of South Florida basketball team...chill out.

The defense of Andre McGee and Preston Knowles has been praised at length on here in recent weeks, so I just want to take this opportunity to compliment McGee on his two big three-pointers, and Knowles on his short jumper and great assist on one of Samardo's dunks.

I'm sorry, I couldn't help it.

Watching Jared Swopshire on Wednesday was like getting a glimpse of what he's capable of doing night in, night out in the Big East if he puts on a decent amount of muscle. The strides he made over the summer prove he's dedicated enough to make it happen, which is exciting.

Pop, lock and Swop it.

Someone told me that Terrence Jennings blocked the shot of an athletically-lacking center in the LSU/Tennessee game last night. It happened. His arms are that long.

Even more encouraging than the 12 points and three monster blocks was the fact that Earl Clark turned the ball over just once against a team known more for its speed than its size.

You would have thought the fact that it was the 800th game being played in Freedom Hall would have been more publicized, especially since it's the last big, round number that the arena will ever see. Oh well.

Seven Big East wins should have about 12th place in the conference locked up. Let's go ahead and shoot a little bit higher.