Share All sharing options for: Five things we now know about South Florida

I'm interested to know why the Big East set up Louisville's league schedule in a way so that the Cardinals would play South Florida a second time before playing so many other teams once, including mirror game opponent West Virginia. My first instinct was that the powers that be in the league office were hoping to pad the records of some of the teams expected to finish near the top of the standings before February and March, but then you also have the odd case of USF, which has already played Depaul twice meaning after tonight, games against two opponents will have made up half of their conference schedule.

Anyway, seeing as how tonight will be Louisville's second look at South Florida, let's dive into five things we know about the Bulls that we might not have on Jan. 7.

1. Gus Gilchrist can shoot the ball

The 6-10 freshman doesn't look like much a scorer, but he's hit double figures in every game but one since dropping 11 on the Cards three weeks ago. Over that span, the big man has knocked down 6-of-12 attempts from beyond the arc, including 2-of-3 in his 18 point performance against Villanova last Saturday.

Louisville will undoubtedly devote just as much attention to stopping Dominique Jones as they did in the first meeting, but locating Gilchrist and not allowing him to take uncontested shots along the perimeter needs to be defensive priority No. 2.

2. South Florida isn't the worst team in the Big East

Three weeks ago, the Bulls were the lone team in the league with a losing record and appeared destined for another 16th place finish. But USF has faced Depaul twice since then, winning both contests by a combined 31 points. They've also distinguished themselves from the Blue Demons and equally winless Rutgers by hanging tough against Pitt, West Virginia and Villanova.

3. Dominique Jones is the only Bull capable of consistently making free-throws

Though he shot just 1-of-10 from the field, USF's leading scorer was 8-of-11 on uncontested straightaway 14-footers with the clock stopped in the first meeting between these two teams, while the rest of his squad was a miserable 6-of-18. At 59.9%, the Bulls rank last in the Big East in free-throw percentage.

4. USF will give Earl Clark the three

Clark scored a game-high 22 points in the first tilt, and knocked down 3-of-8 three-point attempts, all of which were uncontested. The Bulls are aware of their total lack of an answer for Clark, and apparently feel their chances of slowing down the future millionaire are higher if he's taking wide-open outside shots than if he's moving towards the basket.

Earl should be able to get in plenty of work on his form this evening.

5. Terrence Williams is still capable of dunking in games being played against South Florida 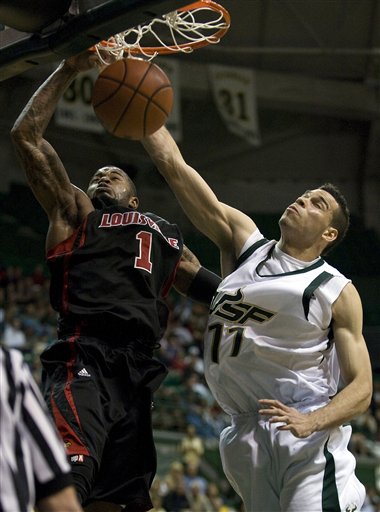 There were those who didn't think it was possible.