Though none of us wanted to see it happen, this was a game the Cards had earned the right to lose.

Not one of us would have - or at least should have - raised a fuss if U of L, winners of seven straight and slayers of unbeatens and arch-rivals alike, had faltered on the road against the No. 8 team in the country, especially considering how well Syracuse had been playing at home and the fact that just two Cardinals came into Sunday having ever attempted a shot inside the Carrier Dome.

It's been a decent little run.

I can't wait to see just how good these guys can be.

Following in the footsteps of Reece Gaines, Francisco Garcia and David Padgett, Terrence Williams has officially become my panicky "just give the ball to ___" guy for this team. I never thought he'd get there, but given the number of times over the last two weeks that I've uttered that phrase with his name inserted at the end, I felt it was the appropriate time to make it official.

Did anyone else feel sort of bewildered at the end of the game? I'd either spent so much time mentally preparing myself for a heartstopping finish or become so acclimated with tight closing minutes that I was almost in shock when the clock hit zero and the final score showed us up by ten. I spent about three seconds looking around the room before giving a few consecutive soft claps and an excited but still noticeably confused "yeah."

Thanks for the extra couple of days of life, Syracuse.

Earl Clark's three to put us up 57-55 was easily the biggest "NNNNOOOO......YYYYESSSSS" moment of the season to date. In fact, I was so against the shot that I didn't even go that crazy when it went down. If you watch the replay of the game, you'll notice that the bench had a similar reaction. When Preston Knowles' initial shot went up, Will Scott and company looked about ready to explode. When Earl cocked and fired, everyone's face took on an "oh shit" expression, and when it went down everyone was so shocked that a few fist pumps and mini-jumps were all that could be mustered.

While Clark definitely had his fair share of mental lapses on Sunday, especially when he was pressured by the guys in the middle of the zone, he never once gave anyone reason to question his effort, and he scored five straight points and snagged two rebounds during the biggest three-possession stretch of the game. Big players step up big in big moments, and that's exactly what Earl did.

Speaking of "NNNNOOOOO....YYYYESSSS" moments, T-Will's shot in the final minute surprisingly wasn't one for me. For the first time in four years I had full confidence in a Terrence Williams outside jumper, and that confidence was rewarded.

Twenty-nine minutes, zero turnovers, 13 points and a couple of huge three-pointers. Aside from the foul in the last 30 seconds, this was about as complete a Good Edgar performance as we've seen.

It's OK to be excited, everybody, but just don't make it so obvious that he notices.

Terrence Jennings is simply light years ahead of where he was in November. Not only is he a shot-blocking machine, but he's appearing more and more capable on the offensive end.

I've said it before and I'll say it again: with the way he defends, if Jennings can just make uncontested lay-ups and dunks and avoid turning the ball over when we're running the offense, then he can provide an enormous boost for this team.

I thought Syracuse would probably take this one, but I don't feel anywhere near as silly about being wrong as a lot of these people do.

Arinze Onuaku scares me from 700 miles away. That man is a behemoth.

Just when I thought it was impossible for me to dislike one person as much as I dislike Eric Devendorf, the insufferable little boy started talking shit to Preston Knowles.

In case you haven't watched much Syracuse basketball over the past three seasons, here's a quick summary of Devendorf's role in most of their games against well-regarded opponents: Eric Devendorf does something well at some point in the first 38 minutes of the game, Eric Devendorf prematurely talks shit to someone on the other team, Eric Devendorf disappears or plays poorly in the game's final two minutes, Eric Devendorf's team loses.

You sir, are not worthy of humbly shaking Preston Knowles' hand.

Even though he sometimes does things on the court that make small children wearing Cardinal cheerleading outfits cry, the way Jerry Smith continually shows heart and cheers for his teammates makes him impossible to not root extra hard for. 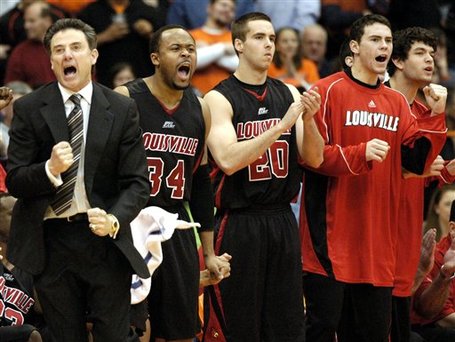 He and Andre McGee are two guys whose selfless dedication to the team can never be called into question, so it shouldn't come as much of a surprise that both served up mature quotes in Eric Crawford's column this morning despite not playing particularly well on Sunday.

Knowes' airball may have been the worst three-point shot I've seen from a Louisville player since Tony Williams shot it behind the backboard from the corner during his senior season. Of course Preston drilled his next attempt from beyond the arc and got his hands on the ball on two of the next five defensive possessions.

"What we did is listen to our Hall of Fame coach instead of our own agendas,'' Williams said by phone late Sunday after the Cardinals returned from Syracuse. "We're thinking of we now, not our own agendas.''

"Defense is fun for this team,'' said Williams.

Terrence Williams is kind of cool.

Jim Burr: not all that atrocious? Everyone agree?

Despite his continued inability to make three-footers, I still think it looks like Samardo is coming around. He made a couple of nice passes out of the post, and put enough of a body on Onuaku on multiple occasions on both ends of the floor to allow Williams or Clark to come down with a rebound.

Everyone keeps talking about how good this team can be if it starts knocking down outside shots with some consistency, but if Samuels can start picking up the 8-10 points that he's leaving on the floor just about every game, well, that would be just about as big.

He's got an opportunity to have a monster game this weekend against a West Virginia team lacking any real post presence.

Jonny Flynn: 6-of-25 from the floor in two games against Louisville.

Our guards can defend.

Nice to hear that George Goode is back to being ready to contribute, because he's another guy who's really easy to cheer for. You never saw him sulking on the bench during any of the last six wins; he was always every bit as into the game as the guys who were taking short breathers.

Actually, when you think about it, it's amazing how much more of a team these guys appear to be now than they did when the season started. The bench is always into games, and you never really get the feeling that there's anyone who might secretly want another player wearing red to fail.

This has become a really great group to follow.

People, your favorite college basketball team is the hottest squad in the country.

From the dark end of the street to the bright side of the road. Let's enjoy it while we can.

Van Morrison said that. He also said "oh oh Domino, roll me over, Romeo," but that doesn't apply quite as much.