I'm not going to try and sell you on the notion that Louisville's win over Rutgers Wednesday night was as important or as satisfying as its three prior victories, but I do believe it was every bit as encouraging.

After Rick Pitino's team somehow managed to escape from a hellacious stretch unscathed, the common belief was that it would be difficult for the head coach to get his team up for a tilt with one of the three remaining winless teams in the Big East. What happened was that the Cardinals came out playing every bit as hard as they did against the three ranked foes and their arch-rival. What happened was that U of L used its much ballyhooed defense to trigger a remarkable 23-0 run to put the game out of reach early on. What happened was that Louisville's star player and senior co-captain went at Rutgers the same way he went at Pittsburgh, an act of leadership his teammates couldn't help but mimic.

It didn't induce the same screams, celebrations or hour-later exclamations that the 'Nova, Notre Dame and Pitt victories did, but I loved this win.

No point in beating around the shrub: Terrence Williams is playing like a guy fully capable of leading his team to a national championship. The effort, defense and rebounding have always been there, but all of the sudden he can hit the open outside shot with some consistency, he's making free-throws, and he's completely cut the five-foot fadeaway out of his repertoire and is finishing strong once he gets into the lane.

T-Will is simply playing out of his gourd right now, and it's scary to think about just how good this team could be if he can somehow keep this up. I don't think we can bank on the outside shooting being there night in and night out, but if he can do all the other things as well as be the guy on the floor that his teammates can look to in brief moments of despair, then he can carry this team to Detroit.

Also, if he doesn't hurt his hand on the rim. Seriously, it's cool, but take it easy.

It's become quite obvious that Pitino is using Andre McGee and Preston Knowles the same way a baseball manager uses a talented reliever: he's having them throw everything they have at opponents for four or five minutes, and then he's pulling them regardless of how well or poorly they performed so they'll be able to go full tilt the next time the team needs a jolt.

It's gotten to the point where I'm not even trying to hide my excitement every time I see Knowles and McGee getting ready to check into a game. I've become that annoying grade school basketball coach who was obsessed with defense and keeping your hands up when the other team shot free-throws.

This team, and that guard duo in particular, have made watching defense fun.

Also making watching defense fun: Terrence Jennings. The official stats say he has 19 blocks, I say he has 3,002. When you see an opposing big man grab the ball in the post and show no signs of wanting to kick it out, everyone wearing red knows what's going to happen five seconds before it does.

His effort, his energy and his understanding of what to do on both ends of the floor is up significantly since the first month of the season, and he's become a guy who has really helped this team during its current stretch of success.

During the first seven minutes of the game, Edgar Sosa appeared to be playing with the completely pass-first mentality of a true point guard. And for the first time since he's been a Cardinal, it felt natural. Though Louisville committed 17 turnovers, not one was attributed to the starting point guard, who finished the night with a team-high four assists.

The most encouraging thing about Sosa's play in recent weeks - to me anyway - is the drastic increase in his effort level. Even when he wasn't playing particularly well against Pitt, his shoulders never dropped and he never regressed to his customary loafing, he just kept playing and ended up making a huge assist to Samuels in the closing minutes. And even though he's apparently never going to be anywhere near the defender his three backcourt mates are, he really is trying, and that's something you couldn't say at any prior point in his collegiate career.

Is Good Edgar through renting and ready to buy? Stranger things have happened.

So Andre McGee gets a T for arguing a bad call in the same manner you see at least once in 95% of college basketball games, but the officials say it's OK for Hamady N'Diaye to have to be restrained by teammates from running out on the court to protest a call? No, these guys are totally consistent. Now if you don't mind, I'm going to go stay seven feet away from a point guard so I don't get called for a foul five seconds before I body slam a center in the paint knowing full well that it won't draw a whistle.

80-59 would have been so much cooler. Steiden would have made it happen.

I loved how Pitino said earlier this week that the team gets energized when it watches itself pressing during film sessions. It made me appreciate this T-Will quote even more:

"We're on a roll right now. We just want to keep it up," Williams said. "We don't want to get too big-headed, just stick with our defensive schemes. Our trap is the main thing that works. Our guards are just dogs on the ball."

These guys all seem to feed off each other so much. When you're on the bench or in the back of the press and you see McGee and Knowles harassing opposing ballhandlers with that type of intensity, you can't help but be inspired to ratchet your own intensity level up a notch.

Have you ever heard an announcing duo so completely dedicated to not talking about the game they're being paid to call? Blind people have to hate ESPNU even more than people who don't have ESPNU.

Fact: The basketball team held Rutgers to less points than the football team did.

I'm not really sure how a gym that sees the home team lose as often as the RAC does develops such a widespread "difficult place to play" reputation. It's like saying no high school team in the Louisville area wants to go to Walden on a Tuesday night.

Another great effort (literally) from Samardo, but my man, you simply can't dribble that much that close to the basket and expect things to work out well for you. He got away with it a couple of times against the Scarlet Knights, but he won't against just about anybody else remaining on the schedule.

On a more positive note, he did set the record for most pictures taken of a Louisville player dunking in one season. 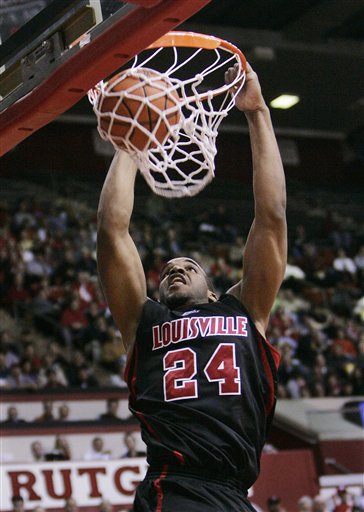 Seriously, T-Will dunks 37 times and there isn't a respectable action shot of him to be found, but there are multiple Samardo dunking pictures from games in which he didn't even play.

U of L is 5-0 in the Big East with three road wins and home victories over Notre Dame and Pittsburgh. It just feels good to say.

Before Big East play started, I think all of us would have taken a final record of 13-5 in the league. Well, assuming (I'm fully aware of the dangers) that this team is capable of handling South Florida, Providence, Cincinnati, Seton Hall, St. John's and Depaul, that would leave just two wins to come out of the Syracuse, Connecticut, Notre Dame, West Virginia, West Virginia, Georgetown, Marquette group in order to hit 13.

This team is going to lose games before the end of the regular season, I think we've all accepted that, but it's put itself in prime position to head to Madison Square Garden with a fairly sparkling league record.

It was great to see Sosa and Earl Clark play so loose and so well in New Jersey, considering the fact that they've always seemed to press when the team has traveled to the Northeast.

Rutgers shouldn't be this bad. Rosario's talent is easy to identify, as is Echenique's, but there's no excuse for guys like J.R. Inman and Corey Chandler to be playing as poorly as they are. I really like Fred Hill - the man punked out Bobby Gonzalez - but if this team hasn't made significant strides by the end of the season, and isn't at least competing for a single-digit finish in the league next year, then it might already be time for the program to start thinking about taking things in another direction.

A Big East program located smack in the middle of so much amateur talent should not be a perennial doormat.

I'm not worried about Jerry Smith. He's one guy who won't let a scoring slump affect his effort level. There's going to be a game soon where a team leaves him alone for five or six big outside shots, and he's going to knock them down. The man's fine.

I think we're probably up against it on Sunday, but I'm still just so excited about this team right now. We're back to where we were a year ago when the time between games starts to feel like an eternity. Tip inside the Carrier Dome can't get here soon enough.

I will buy that shirt.