Share All sharing options for: What to read while your sort of racist distant relative gently weeps

It's going to be OK, Uncle Chuck who I see for an hour on the day after Christmas every fourth year.

On a day where change figures to be a prevalent (to put it mildly) theme, it's fitting that we begin with the news that running backs coach Tony Alford has left U of L and accepted a similar position at Notre Dame.

He's the fourth Louisville assistant to leave since the end of the season.

"Notre Dame is the epitome of college football," Alford said in a statement. "To join a place with the tradition and history of Notre Dame is very exciting, and I'm grateful to coach Weis for extending me this tremendous opportunity."

In losing Alford, the Cardinal football program is not only losing one of the hardest working and highest energy guys it had, but perhaps its best recruiter.

"He certainly works hard at (recruiting)," said CBS recruiting analyst Tom Lemming, "and that’s half the battle. But he’s never been at a school where he has had to knock heads with the top schools for a great player. So this is a chance for him to make a name for himself. I think it is realistic to expect him to land three to four great players in the class of 2010. We’ll know a year from now if those expectations are being met."

In a related story, Card Chronicle has received the never-before-seen blueprints for the new entrance to the offices of the U of L assistant coaches. Check it out. 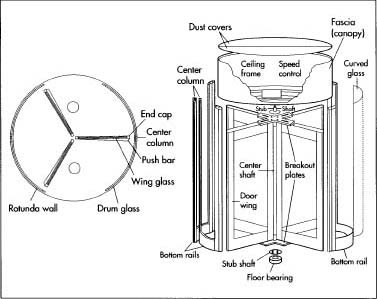 Sure, a similar joke has been making its rounds on the Internet for the last couple of weeks, but those efforts were all void of a certain pizazz.. What exactly does pizazz mean? No idea, but I've got it baby. Pizazz and a pair of cowboy pajama pants on that would make all your significant others look at you with just a little bit more respect this morning.

Best of luck to coach Alford in South Bend.

Though recruiting is admittedly not my bag, I have to admit that my interest is piqued every time I hear the name Jeremy Tyler.

The junior big man out of San Diego was in Dayton this weekend to take part in the "Flyin' to the Hoop Classic," and though his team went 0-2, the Cardinal commit reportedly put on quite a show.

Jody Demling was there and lived to tell the story.

Wow. I had seen Jeremy Tyler play a bunch during the spring and summer, but I forgot just how big the junior at San Diego High School was physically.

With Louisville coach Rick Pitino and assistant Walter McCarty watching, Tyler hit 9 of 14 from the field, 9 of 10 free throws and finished with 27 points, 19 rebounds, six blocked shots and four assists in the Cavers 64-57 loss to Cleveland (Ohio) Heights.

San Diego went 0-2 in the Flyin to the Hoop Classic in Dayton, but Tyler finished with 49 points and 30 rebounds. The team only has seven players and is without coach Kenny Roy because of an eligibility flap back in California.

Talked with Tyler and his father after the game and will have a full story later. Couple of interesting things the player said:

"I can't wait to get to Louisville."

"Coach Walter (McCarty) was a big reason why I committed to Louisville."

Color me excited. And burnt sienna.

Speaking of Dayton, the Cards are again opening the NCAA Tournament at UD Arena in the latest installment of Bracketology, this time as the two seed in the South.

Steve Kragthorpe landed a huge JuCo recruit yesterday in Joe Evinger. Not huge as in highly touted, but huge as in, well, huge. The offensive lineman out of Santa Clarita (Calif.) College of the Canyons stands 6-foot-7, 340-pounds.

"I felt like (Louisville) was the right place for me," the behemoth told Jody Demling. "I am really excited to come back home. The fans were great at the basketball game and I hope they're the same for the football team. I can't wait to get there."

Oh they will be Joe, they will be. Now can we quickly get you to sign right here on this indestructible piece of paper?

This past season, Evinger was named a first-team junior college All-American, first-team Region III All-California and a first-team all-Southern California Football Association performer. He'll have three years at U of L once he arrives on campus in May.

The "Superman Wears (insert name) Pajamas" thing has definitely run its course...unless the inserted name happens to be a Louisville Cardinal. 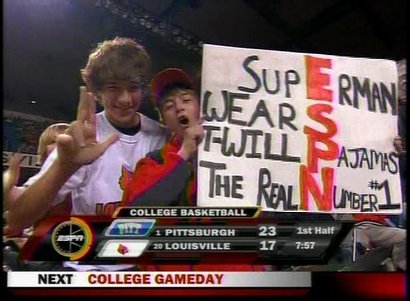 If one of you can get a "Robocop Wears Lee Steiden Armor" sign on TV, then I'll really be impressed. Sure, it doesn't really make sense, but you'd be out there mixing it up, and I think the majority of the nation would appreciate that.

This is the type of change Sam Cooke was singing about. Robocop sign change.

Rick Bozich with a super sweet column on Jerry Eaves. Read it or your penis will fall off. Fact.

You sneak by yet again, illiterate females.

Not quite sure how to feel about Pitt dismantling Syracuse just 48 hours after playing an exhausting away game inside Freedom Hall. On one hand, it makes the win over the then No. 1 team in the land seem that much more impressive. On the other, it makes a potential loss inside the Carrier Dome on Sunday a little bit worse.

I suppose these are things you really shouldn't spend too much time thinking about when you play in the Big East. You also shouldn't think about math.

Providence notched a nine-point win over Cincinnati in the only other Big East contest Monday night. The bigger story inside the Dunk was that Johnathan Xavier managed to keep himself off the floor when a Bearcat player accidentally brushed shoulders with his brother.