Just ten days after being hired as Louisville's new linebackers coach, Brent Guy has been promoted to defensive coordinator in order to fill the void left by Bill Miller, who left to take the same job at Kansas last Saturday.

Guy most recently was the head coach at Utah State, where he was fired after compiling an 8-38 record over four seasons. Prior to that he had been the defensive coordinator at Boise State and Arizona State. 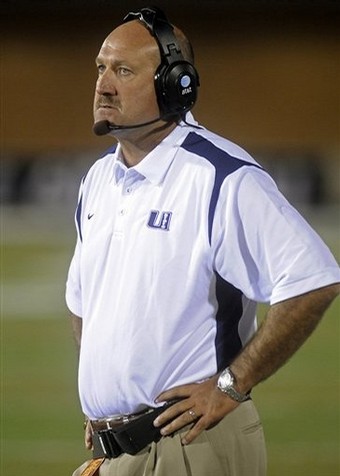 "Brent has a proven track record playing great defense wherever he has coached," said Steve Kragthorpe on Jan. 6. "I'm excited to add a coach with the expertise to our staff. He had great success at Arizona State as a defensive coordinator and can add a lot of expertise to that side of the football."

Whatever. The No. 1 team in the country is taking the floor inside Freedom Hall in 25 and-a-half hours. Your perpetual coarseness does not phase me, football.