Last Meeting: Pittsburgh won 76-69 (OT) in the quarterfinals of the 2008 Big East Tournament

The Panthers are another one of those teams with a backcourt featuring one or two exceptional guards and then not much coming off the bench . But while one would think that Louisville's quartet of ball-hawkers would be able to wear down Levance Fields, "The General" has dished out 24 assists to just seven turnovers in six career games against Louisville. Eliminate his freshman season, and the assist-to-turnover ratio against the Cards becomes an even more impressive 22-to-3.

While not having Ronald Ramon for the first time might make Fields more susceptible to fatigue against the Cards, U of L has to assume that the senior is going to take good care of the ball and attack the likes of Jermaine Dixon, Brad Wanamaker and Travon Woodall that much harder. Those takeaways have to come from somewhere for Louisville to have a shot, even if the Panthers do rank third in the country in assist-to-turnover ratio.

In both meetings last year, Louisville failed to defend the perimeter adequately, but was bailed out by poor shooting performances by every Panther this side of Ramon. Of course preventing the three out of a zone is easier said than done against a team like Pitt. Staying on outside shooters is hard enough when you're also trying to handle a big man as talented as Dejuan Blair, but when you throw in a forward like Sam Young who can tear up the middle of a zone then it's damn-near impossible.

If the Cards are going to try and keep Blair and Young from combining for 50 points, then they're simply going to have to hope that Fields, Dixon, Wanamaker and company have off-shooting nights, because those guys are going to get their looks. The fact that they hit 10-of-18 from deep against South Florida doesn't exactly ring in confidence.

Pitt was the one team that gave David Padgett fits during his senior season, but the Panthers were also on the receiving end of three of the better performances of Derrick Caracter's tumultuous Cardinal career.

Padgett would get so caught up in the physicality of tilts with the Panthers that he was constantly out of position, which made his relative lack of athleticism grossly apparent. Caracter, a more balanced mixture of size and agility, was able to play the physical game he always played regardless of the opponent, and was still able to finish plays on the offensive end. It didn't work against squads like Dayton or in any game where the officials weren't going to let you get away with blatant, two-handed shoves, but it worked against Pitt.

Not that anyone should expect him to get the better of Blair, but it must be noted that Samardo Samuels' game falls far more in line with that of Caracter's than Padgett's. So while his stat line might not end up being Blair-esque, don't be surprised if Samuels gives more of a complete performance than most are expecting. Monday night taught us that he's certainly not going to come in intimidated.

Though not in the modern sense of having a rowdy student section right on top of the action, Freedom Hall can still be a highly intimidating place to play, especially for a highly regarded foe. Somewhere around 20,000 people are going to be doing everything possible to will their guys to a win over the No. 1 team in the country, and that will absolutely have an effect on the game.

The Panthers have made a living against U of L on second chance opportunities since the Cards made the jump to the Big East. Tomorrow should be no different, as Pitt comes in leading the Big East and ranked second in the country in rebounding margin at +10.7 per game. This can't be a game where Samuels stands around and hopes to see Earl Clark or Terrence Williams skying for a rebound. He doesn't have to put up big numbers on the glass, but he does have to keep Blair - the nation's leading offensive rebounder - from doing so. Find the big man, put a body on him, and then if the ball doesn't bounce your way, have faith that Clark or T-Will are going to do their job. 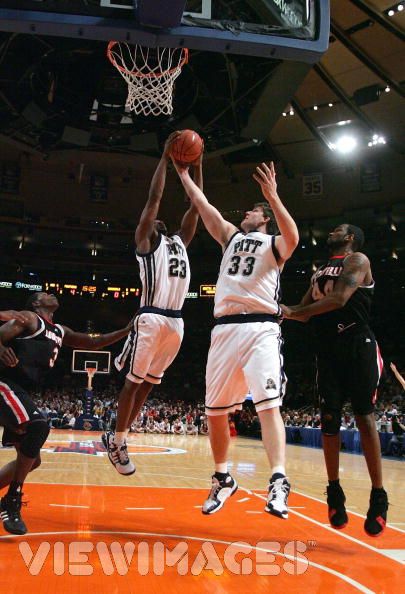 Clark and Williams don't both have to be Superman (in the words of Rick Pitino), but one does. The other one can settle for being like Flash Gordon, or something. If either is Mighty Mouse then we're done.

Louisville is 9-0 this season when it makes more than seven three-pointers in a game.

Pitt had been ranked No. 2 on 16 different occasions, but is currently the No. 1 team in the country for the first time in program history. Louisville has never been ranked No. 1.

Earl Clark will celebrate his 21st birthday on Saturday.

The Cardinals have won their last two regular season meetings with No. 1 ranked teams, and are 3-5 in regular season titlts with top-ranked squads all-time.

U of L has won five of its last six overtime games, the lone loss coming at the hands of Pittsburgh in last year's Big East Tournament.

Louisville is unbeaten when shooting better from the field than its opponent, outscoring its opponent’s bench, leading at halftime and leading with five minutes to go.

Pittsburgh is 19-20 against ranked teams under Jamie Dixon.

"I don't know if it brings more pressure on us. It brings a sense of awareness to our players. We will be ready to play. We've talked about our ranking as two things: it could be a distraction or serve as motivation. It's motivation to prove to some people that don't think we're No. 1. We've got to prove it to ourselves." --Jamie Dixon

"When you go into a game against a team like Louisville, you just know that any slippage and you can be blown out. Obviously, it's natural to get up more for a game like that. It's on ESPN. Guys love to play on TV and once again to prove to the country and ourselves how good we are." --Levance Fields

"To be honest, some of us got snubbed, if you really want to look at it that way, from being those kind of recruits. We're a bunch of guys who won, who are hard-nosed, and I think we are a great example that you don't always need the McDonald's All-American on your team. You just need a group of guys who are willing to work and want to win." --Levance Fields

"The Panthers will lose, more than once even, in the Big East. They may even lose Saturday. Louisville’s a quick, athletic team with a load of talent. If they do, here’s a prediction that the student body will flood the Freedom Hall floor." --Eric Hall (via Tom Heiser)

"It's not going to be a Notre Dame type game where you're going to be wowed on every play. This doesn't happen when you play Pitt. This is going to be a blue-collar, lunch-pail game where both teams play good defense." --Rick Pitino