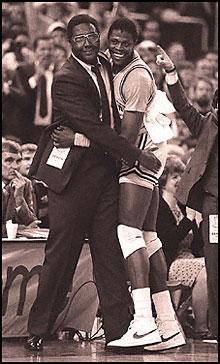 Apparently the Nittany Lions have been relegated to the BTN for the duration of the season.

Raise your hand if you think Duke is the second most likely team to win the national championship. Now raise your other hand if you can name more than one player for Georgia Tech.

I'll never forgive Jamie Dixon if the Panthers lay an egg and kill the hype heading into Saturday. Go Pitt.

Because Elon has a player you just have to see for yourself.

Both teams need a victory to keep alive any hope of claiming a Big Five title.

Two programs with a wee bit of history and just a touch of animosity for one another. It's a must-see game even when the teams are down, which isn't the case this year.

Something's gotta give as two of the league's four winless squads do battle in the Queen City.

When I was a little boy, SMU and Rice weren't even in Conference USA.

The Qwest Center is one of the most underrated home court advantages in the country.

Two of the SEC's 12 unranked teams do battle in a game that will be played in front of literally hundreds of disinterested spectators.

This is actually a pretty big game for a pair of teams that figure to finish right around each other in the Big East standings.

Is the kid with the crazy hair still at Mizzou? No? What about the guy for Colorado who was always trying to murder people? Him neither? Well, there goes my interest.

Wasn't Miami supposed to be amazing this year? Is that still happening?

Have not seen the Bears yet this year and am actually sort of looking forward to the opportunity.