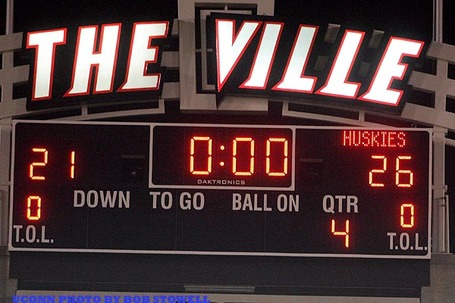 You simply cannot squander opportunities this great when you're a program in flux. Louisville was one quarter and-a-half of average play away from being the first team in the Big East to notch a conference win, doing so at the expense of a squad that defeated them in heartbreaking fashion a year ago, and poised to be 5-1 when South Florida rolls into town on Oct. 25. As it is the Cards are again starting league play a game in the hole, 2-2 overall against a soft schedule consisting of nothing but home games, and just under a month away from being able to walk on the field in something other than a no-win situation.

Basically, we're exactly where we were three weeks ago.

I think the fact that all of us were so eager to be excited about Cardinal football in mid-autumn again made tonight that much harder to stomach. It would certainly explain why the Kragthorpe bashing on the way out of the stadium was more intense than it was after last year's Syracuse game or this year's Kentucky game. We're talking serious, serious hate being tossed about from all sides.We're talking calls for the return of John L. It was the closest I've ever been to a pitchforks and lighted torches situation.

Just a disastrous night on so many levels.