It's an all-Big East duel in our concluding quarterfinal clash of the uncool. A spot in the semis against a UK rep to be determined is what's at stake.

Good Lord I'm excited. This must be how Jim Lehrer feels every day.

--Did everything this side of a naked headstand to get attention during his team's 92-82 upset victory over Louisville on Jan. 19.

--Got into a fist fight with an assistant during halftime of an eventual loss to West Virginia on Feb. 17.

--Got into an altercation with Rutgers head coach Fred Hill during a regular season-ending loss to the Scarlet Knights, and then harshly criticized the officials during his postgame press conference. His actions led Seton Hall AD Joe Quinlan to suspend him for the first Big East game of next season.

--Called a reporter to berate him for a piece he had written, and then asked him if Rick Pitino had put him up to it.

--Did come out looking pretty good in one of the more hilarious announcer flubs of the season.

--Guided his team to nine losses in its final 11 games and failed to make the NIT. 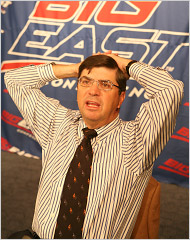 --His poor postseason tie-ins led to 6-6 Louisville staying home while 6-6 Nevada and 6-6 Oklahoma State (among others) went bowling.

--Said that he doesn't "think a playoff is in the best interest of college football," after being one of the commissioners who rejected the proposed plus-one format last week.

--Assembled the worst collection of officials in the history of college football, and then sat back and watched the chaos unfold.

--Reprimanded the official who botched the unfair catch play in the Uconn game, but chose not to reveal what the punishment entailed (although this has allowed me to hold out hope for waterboarding).

--The move to an 18-game league schedule in basketball deserves at least partial credit for the Big East getting a record-tying eight teams into this year's NCAA tournament.

--Made the brilliant (in my eyes) move to include all 16 teams in the Big East Tournament, beginning next season.

So which denizen of the nation's best conference will claim the final spot in the semifinals? It's all on your shoulders.