It wasn't quite the Big East Tournament, but the last three days provided exactly what Louisville fans needed to see after the disaster in Nashville: three convincing wins over a trio of outclassed opponents. That's the good news. The bad news is that after Saturday's tilt with Austin Peay - a team that lost to Ohio by 11 last month - the talent level of the opposition hits a fairly significant spike, and will remain pretty constant for the next three months.

Absolute statements pronounced in the realm of the sports world are almost always made solely for effect, and this one is no different: Earl Clark is the difference between this team being good and this team being great. When Clark is motivated, aggressive on the defensive end, willing to attack the glass, scoring points through the offense and looking to involve his teammates, then Louisville is a legitimate top five team capable of beating anyone in the country. When he's lethargic on defense and in the press, taking contested jumpers, content to go 1-on-3 and relying on T-Will or Samuels to come down with a rebound, then Louisville is a team that can lose to Western Kentucky by 14 on a neutral court.

Ninety-nine percent of the teams in the country don't have any answer for Clark, and can only hope that he takes the night off. In his junior season, it's time for that to stop being an option.

We've been over all the things that Terrence Williams brings to the table a number of times on here over the last couple of years, but if he really wants to assume the role of leader then he needs to learn what not to do. T-Will was the only one who played with any urgency down the stretch against Western Kentucky, but he spent most of his energy attempting to create shots for himself. This wouldn't be a problem if he were a good shooter; he is not. The same holds true for the holding the defender while coming off of a screen in order to draw a foul move he likes to utilize when the Cards are in the bonus. If you can't make free-throws then don't work hard to get to the line.

Williams makes this team go with his rebounding, passing and defense. He's going to go through some stretches where he knocks down consecutive outside jumpers, but this is never going to be the norm. When trailing late in the game, the best thing T-Will can do as a senior leader is play great D, board and try to create shots for his teammates. It's something he needs to understand as soon as possible.

More of the same from Samardo Samuels, who continues to eat up opposing low-major talent in the post. I'd really like to see him work more on turning to his right and hitting the face-up jumper or trying a half-hook with his left hand, because if he doesn't prove he can score in either of these manners then Big East centers are going to drape themselves on his left shoulder the same way they did with David Padgett near the end of last season. 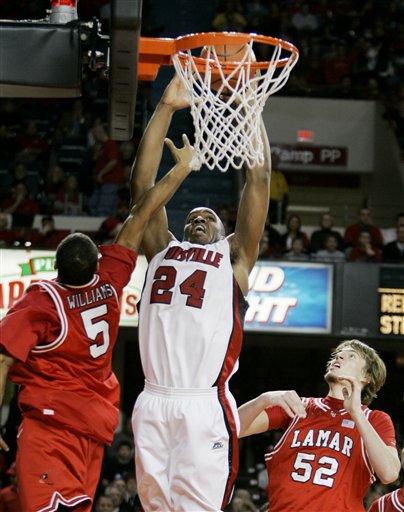 Yet another erratic string of performances from Edgar Sosa, which is disappointing. He has to understand that if his unneccessary, at times out-of-control right-handed drive to the bucket works about 50% of the time against the likes of Lamar and Indiana State, then it's only going to work about 20% of the time against Pittsburgh and Connecticut. Also, I'm not sure where the flying elbow on his jump shot came from, but it needs to tuck itself away.

Everyone still refers to him as streaky, but Andre McGee has proven himself to be a pretty reliable outside shooter over the last year and one month. Statistcally, McGee was U of L's best three-point shooter a season ago, and he went 5-for-13 from deep over the weekend to pick himself out of an early slump. If he can force teams to pay extra defensive attention to him around the perimeter then it will really open things up for Jerry Smith or whomever is in at the two.

I get about as excited when an opposing player goes up for a shot against George Goode or Terrence Jennings as I do when Samuels catches the ball alone in the post on offense. Jennings has the potential to be tremendous in a few years if he keeps his heart and head in the right place, and Goode has easily been the most pleasant surprise of the season to this point.

Obviously these would be more impressive if the team had played anyone of any real consequence, but still, good stuff.

I needed some Lee Steiden in my life at some point over the past three days. I needed it like I need air. And that's an awful lot, girl.

The phrase "high basketball IQ" seems to be attached without hindrance to smaller white players far too frequently, but I found myself saying it with regard to Kyle Kuric multiple times over the weekend. He has a great nose for the ball, a terrific outside stroke, and he's got the potential to really help this team against some of the bigger, zone-favoring squads in the Big East.

Reggie Delk seems frustrated. Maybe I'm seeing something that isn't there, but that's how it appears to me. I'd really like to see him knock down a string of outside shots and build a base of confidence.

Jared Swopshire does not look like Barack Obama. Sorry, University of Louisville teammates.

I always enjoy the comfort that comes with December games in the Hall against completely overmatched opponents, but the past three days have left me ready for some competition...or at least some expected competition (read: I did not take Western seriously). It shouldn't come on Saturday (read: I am not taking Austin Peay seriously), but the four games after that are all very losable. And after that there's a tiny rivalry game on the docket.

It's slow right now, but we're very close to things picking up in a hurry.