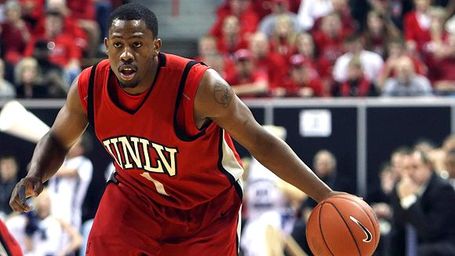 Big news on the eve of a dangerous "please god don't let these guys be looking ahead" matchup with UNLV, as the playing status of the Runnin' Rebels leading scorer, Wink Adams, is being referred to as a "game-time decision."

Adams strained his lower abdominal muscle on Tuesday night in UNLV's 73-60 win over Southern Utah. He hasn't practiced since the injury, and earlier in the week the senior guard said he doubted would be able to go against Louisville.

"I think so," Adams said when asked if he would be sitting out the New Year's Eve tilt.  "But we really don’t know how I’ll feel Tuesday or around that time."

Adams leads the Rebs in scoring at 14.1 ppg. He scored just nine points on 3-of-12 shooting in a loss to the Cardinals a season ago.