Well, for about eight minutes we were all treated to the sort of dominant performance this team was expected to give night in and night out over the course of the early part of the season. For the final 32 minutes, we saw the baffling inconsistently that has instead plagued the preseason's third-ranked squad.

Still, the Cards prevailed against their toughest opponent to date and tasted victory outside Freedom Hall for the first time, a pair of facts it's hard to complain about.

I can't recall a Cardinal player coming closer to single-handedly winning a game than Earl Clark did last night. He did everything he wanted so seemingly effortlessly in the first ten minutes of the game, which made it all the more astonishing when his teammates completely neglected him for the final ten minutes of the half.

Samardo Samuels is a man-child, Terrence Williams might be the best athlete in the country, but this team isn't all it could be when Earl Clark isn't the best player on the floor. If U of L wins any sort of postseason championship (conference, regional, national) then I can just about guarantee that Clark will be the one holding the most valuable player trophy in the middle of the on-court celebration...and that his speech will be hilarious.

That was a Herculean effort.

Major praise needs to be sent in the direction of one Rick Pitino for scrapping the press, going to strictly man-to-man and sticking Terrence Williams on David Huertas for the final two and-a-half minutes of the game. There were only two Ole Miss players on the floor capable of winning the game for the Rebels, and Pitino made every move he could to minimize the possibility of that happening.

Far from T-Will's best offensive effort (ZOMG HE MISSED A DUNK), but the three-pointer and the short jumper on the baseline that he did make were two enormous shots. And then of course he did an outstanding job on Huertas in the last two minutes, and came down with the two biggest defensive rebounds (two of his 11) of the game.

What can you say to Samardo Samuels besides mama said there'd be days like this? Forget about bringing the ball down too low, not passing out of the post and dribbling when you shouldn't be dribbling; I've never seen somebody that big miss so many semi-uncontested lay-ups. Math and science were never my thing, but there had to have been multiple laws of averages and physics defied inside the U.S. Bank Arena last night. If Samuels makes 3/4 of his two-footers then the game is never in doubt, which is sort of comforting, I guess.

It was the first real adversity the big man has faced, and even though his expression failed to hide his dismay, he never stopped working hard and finished the game with 13 rebounds, eight coming on the offensive end.

All you can do is hope that the freshman uses last night as inspitration, because it goes without saying that he has to be better.

After three years, I think we can conclude that Jerry Smith isn't going to change the way he plays defense, which means whether or not he picks up three fouls in 30 seconds will continue to depend solely on the officiating crew that particular night. I'd still love for the man to marry into my family, but he does far too many of the same things he did as a freshman. For example, getting too excited and fouling on the press, running into a three-point shooter who shoots 85% from the line, or getting a handle on the ball after a mad scramble and trying to go to the hole instead of slowing things down and letting the rest of the team get into the offensive set.

He's got to morph back into the stable and reliable Jerry Smith that helped last year's team so much when it got to conference play.

Preston Knowles missed a pair of really uncharacteristic quick jumpers during a key stretch last night, but I thought the way he played on defense more than made up for those ill-advised shots. He was only credited with two steals, but he got his hands on at least three more, and also partially blocked at least two shots that went uncredited. He's earning every minute he gets right now. 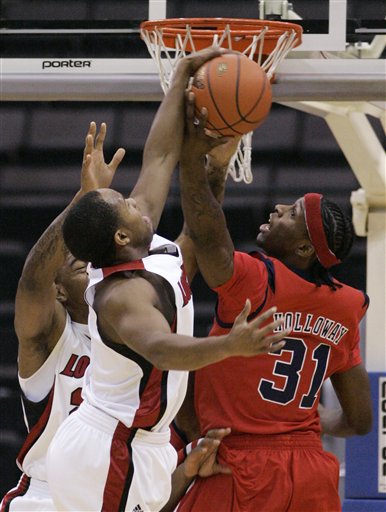 Pitino said after the game that the next step in getting this team to the next level was having Edgar Sosa become a great point guard. I'm not sure if this was simply a motivational tool or if he truly believes Sosa being an elite floor general is a possibility.

The problem I have with looking to Sosa to be the guy at the point come March is that he's never going to bring the defensive intensity that the other three guards do. It's not going to happen. Andre Mcgee made some questionable decisions with the ball again last night, but the pressure he and Knowles put on Warren and Huertas was the key to the run that stretched the lead to ten during the first part of the second half.

If Sosa can obtain a pass-first mentality and stop doing the things like inexplicably driving to the basket and losing the ball out-of-bounds with 20 seconds on the shot clock in the last minute of the game then great, but he's never going to be a guy who can get you cheap points off the press, and he's always going to be a liability if you want to play man against a team with a point guard who can fill it up.

It was good to see Reggie Delk contribute his best minutes of the season thus far. There's going to be at least one time over the next three months when T-Will gets himself into foul trouble and Delk will be relied upon to give some solid time at the three, so getting his confidence up before the new year is a major positive.

I thought it was sort of strange that we didn't see more Terrence Jennings and George Goode when Samardo was struggling so mightily in the second half, especially since each seemed to do some good things during the limited stint they had on the floor. I suppose Pitino saw this as a major learning opportunity, and wanted Samuels to fully absorb it.

If Ole Miss had won, I wonder if (alleged) racially insensitive assaults on cab drivers would have become the next big thing in college basketball. Thankfully, we'll never know.

Yeah, that was lame, but it had to be mentioned.

Here's hoping the team got a great night's sleep and encountered no flight issues.