Six thousand apologies for the tardiness of this post. Holiday obligations are already dominating my life, but things should be relatively calm for the next three or four days.

First non-tournament win! I'll be celebrating with a one-man parade down Eastern Parkway from 3:30-3:45 this afternoon. Please make sure your cell phones are on silent or vibrate.

Saturday reminded me a lot of all the December wins over outclassed opponents at the beginning of the 2005-2006 season, which is more than a little scary. So many times we saw that team come out looking inexplicably lethargic, watched them allow the visitors to become so confident that the game was a dog fight even once the home team decided to start playing, we saw one guy get a hot hand, a couple of turnovers become the start of a big run and then a final score that made it all look better than it actually was.

I'm surprised the Western Kentucky game didn't eliminate it, but this group has to get rid of the undeserved sense of accomplishment and this aura of superiority, because there isn't a game remaining on the schedule that they can't lose.

So Preston Knowles is an offensive machine now? It's like Santa Clause popping in on an April Tuesday just to say hi. 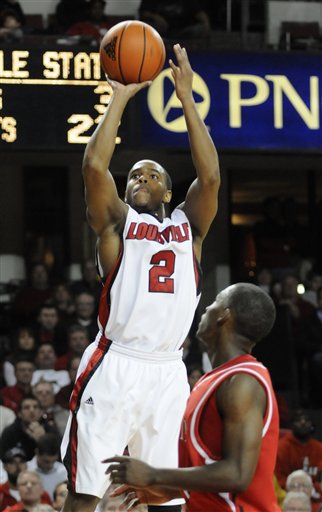 I think we can forgive T-Will for only grabbing five rebounds, you know, because of the whole 20-point, eight-assist, one-turnover thing. On a related note, I think Terrence is 26-for-26 when I say "no" before he shoots, and 0-for-39 when I say "go ahead."

Perhaps the way Earl Clark and Terrence Williams dominated the glass in the Marques Maybin Classic lit a fire under Samardo Samuels, because the big man appeared far more motivated to go after each and every missed shot than he has all season. I love the 9-for-10 at the stripe, but he still needs to be faster and more aggressive when he catches the ball with an opening in the post, because about 75% of those plays aren't going to be fouls one month from now.

More up-and-down play from the point guards, who combined for six assists and five turnovers. McGee's three big steals and timely outside shooting earn him the check mark, but I loved seeing how excited Sosa was on the bench during the late run even though he hadn't played particularly well. It's something we never saw last season.

I still don't understand Louisville's dedication to leaving tall, sharp-shooting guards unmarked. They're really not that hard to find.

Not exactly Earl Clark's best effort, but this picture from sam34gtr is still all sorts of awesome.

I took in the game with a small and not particularly focused viewing audience from the comfort of a living room. The situation was far from ideal, but an outside party listening to the audio or reading the transcript from those two hours would have probably found it hilarious.

A sample recreation, try to find me:

--So I've decided that I am going to send that Kate Spade bag back.

--It's just so much bigger than it looked online.

--But I think that I'm going to really save up and buy that Louis Vuitton.

--Oh my god! That one you were looking at the other night?

--Yeah, it's so cute. Plus, it's more sort of springy/summery and this one is more wintery.

--OH MY GOD PRESTON, TAKE YOUR PANTS OFF RIGHT NOW.

--That's so great. You're going to look soo cute.

Rick Pitino hates Terry Meiners. Don't be fooled by the smile and arm grab, those words were meant.