It's a sad day for fans of heckling insufferable Big East guards infamous for striking homoerotic poses on the playing floor, as Syracuse's Eric Devendorf has been suspended by the university at least through May for hitting a woman.

The incident, which took place on Nov. 1, occurred after SU junior Kimberly Smith came close to hitting Devendorf with her car, an act the shooting guard allegedly felt was punishable by a punch to the jaw. Devendorf's lawyer, who will be filing an appeal, claims this was an act of self defense. 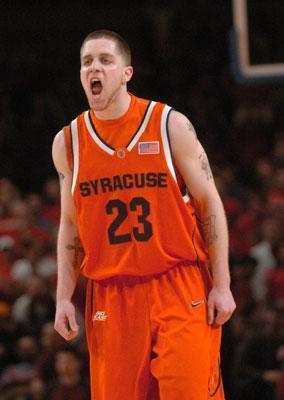 After reviewing the case, the SU board wrote Devendorf this letter, which concludes:

More specifically, the Board found that on or about November 1, 2008 at or near 703 Walnut Avenue, you physically harassed another Syracuse University student by intentionally striking her with your hand causing her to become alarmed and annoyed.

Who doesn't get alarmed and annoyed when they're struck in the face?

The other big thing working against Devendorf was that he was already on probation for violence against another SU student in the spring.

"Health issues," torn ACLs, punching chicks in the face; it just hasn't been a good couple of years for Eric Devendorf. We'll always have you dribbling the ball off your leg and me making fun of you in the Hall, my friend.