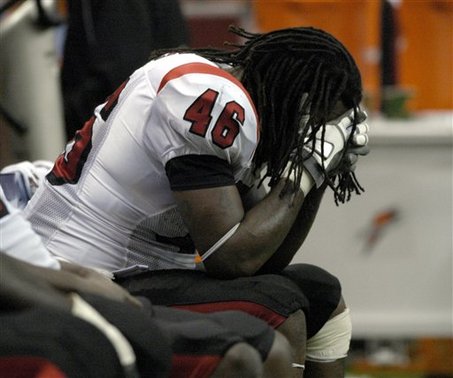 Experiment results: not talking about it doesn't, in fact, make it go away

If the 2007 loss to Syracuse was what ushered in the notion that there was something wrong with the Louisville football program, it's the 2008 loss to the equally dismal Orange that has reintroduced it.

A week after a win over No. 14 South Florida and the most positive buzz surrounding the program since Andrew Robinson tossed for 423 yards and four scores inside Papa John's Cardinal Stadium, the Cards landed on another chute and fell to an Orange squad that had been 0-6 against FBS opponents, and had been outscored by a total of 223-134 in those games.

We've been able to dance around this for the first two months of the season, but the performance of the rest of the Big East and U of L's inability to roll over a weak non-conference schedule have made it perfectly clear: this is, at best, a very average football team.

Still, the loss to Syracuse doesn't automatically brand the '08 Cardinal football season a failure. What it does do is kill momentum, enrage a large portion of the fan base, and drastically increase the likelihood of the '08 Cardinal football season ultimately being branded a failure. If Louisville handles business in what should have been the lone sure win remaining on its schedule, then all the Cards have to do is win two of four to finish the season 8-4 and ensure positive offseason vibes regardless of postseason performance.

That's not to say 8-4 and positive offseason vibes are out of the question. In none of U of L's final four games will their chances of winning exceed 60% or their chances of losing dip below 40%. A quartet of tossup games will be the ultimate determinant of this season's definitive label.

The tools are there for a 3-1 or 4-0 finish, but it's on the players and the coaching staff to regroup and have the mental toughness to step up and save the season.

I'm not going off on Kragthorpe, but Johnny Cochran couldn't defend going 0-6 against Kentucky, Syracuse and Connecticut in the two years after a one-loss season that culminated in an Orange Bowl victory.

Also, here are the rankings of Big East coaches who have lost to Greg Robinson in the four years G-Rob has been in the league:

I think the intense reaction to Earl Heyman's postgame quote -"Coming off a big win against South Florida, you have to refocus in and sometimes that can be hard. To be honest with you, I think it's kind of good for our team. We got a wake-up call." - was a little bit unjustified. Sure the quote was ridiculous, but I think it was simply the product of a guy reaching for the right words after a stunning loss in his senior season and grabbing nothing but inappropriate cliches.

There's no excuse for Troy Pascley dropping a pass with no one in an Orange uniform within 20 yards of him, but I still wonder why we're sending a guy who hasn't played in a month on a route we think can result in a score. If you think this play has the potential to go big, why not send Beaumont or Guy deep?

Curtis Brinkley is legit, but there's no excuse for letting him go for 166 when he's playing on a team with a below average quarterback and next to no talent at wide receiver.

I wish Kragthorpe would at least say something to his players during timeouts. I don't have to know what it is, but it would make me feel better.

ESPNU continually bringing the Syracuse student on for sideline reports made me about 3.7% more upset than I would have been otherwise. Woodny Turenne catching a pass, Bill Ashburn returning a punt, Vic Anderson being a senior and Greg Tomczyk being black didn't help either.

Does this station just not care about being compeltely wrong 20% of the time?

Abdul, it's time for this to stop, man.

Not that he would have automatically sparkled with him, but Hunter Cantwell really needed a healthy Scott Long for 12 games to come close to having the type of senior season so many of us were expecting.

If you're searching, Victor Anderson and Johnny Patrick are reasons to be excited about the next couple of years.

Johnnie Burns has done a tremendous job in his first and only season at tight end. The effort he's put into making himself a boon to this offense is evident every time he steps on the field.

How about Joe Tronzo stepping up and making some huge plays? It's always a pleasure to see guys who do all the little things getting a small taste of the spotlight.

No praise for the defensive ends after this one. There was no pressure coming from the edges, and Syracuse's tackles aren't that good.

Mike Rutherford's Saturday night culminated with him stumbling around the Highlands wearing a full wardrobe of normal clothing and a giant Snoopy head.