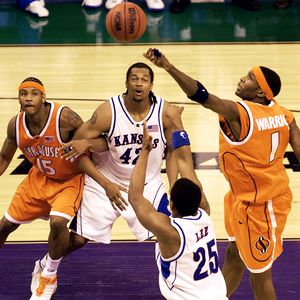 Another huge potential non-con victory for the Big East as the Tory Jackson show continues in Maui against the sixth-ranked Longhorns. The winner almost certainly gets No. 1 North Carolina in the title game.

Dre Smith looks to bust out of an uncharacteristic shooting slump as the Patriots host what should end up being a tough squad from The Mount.

Regardless of how disappointed they are after last night's loss to Syracuse, the Gators have to regroup because a loss here could direct the season towards the '07-'08 path.

Fresh off a solid 53-50 win over Boston College, Rick Majerus and the Billikens will look to spring another mild upset.

The Texas Southern mini-tour of the Big East makes a second stop and increasingly disheartening stop.

I wouldn't watch if I were playing.

Points will be scored.

Another potential notch in te Big East's collective belt as the ''Cuse and Jayhawks duel in a rematch of the '03 national title game. I'm very excited to see how the Orange handle a Top 25 team willing to play a little bit of defense.