The Louisville Cardinals are your 2008 Billy Minardi Classic champions

Share All sharing options for: The Louisville Cardinals are your 2008 Billy Minardi Classic champions

Apologies for not being able to get to the weekend that was any sooner, but I was tied up all day yesterday. Literally tied up. With manila. It was awful.

A friend and I were talking last week about how we wished the team would cut down the nets after capturing the BMC championship. Seeing Rick Pitino with a tattered net draped around his neck during the postgame press conference for the second contest of the regular season would be amazing.

UMass had to ruin everything.

Though he'll undoubtedly be unfairly criticized relentlessly over the next few months, the first weekend of the season showcased just how much better this team is with Terrence Williams than they are without him. The only period of time during Sunday's game where South Alabama looked like it was capable of hanging with the Cards was during T-Will's first stint on the bench. He's the most athletic player we have, the best rebounder we have, the best passer we have, and one of the two best defenders we have.

Williams also appears to have really embraced the leader role. Not only was he always standing and encouraging on the sidelines, but he was constantly the guy communicating during out-of-bounds plays and brief breaks in the action. The issue with T-Will stepping into David Padgett's shoes is whether or not he's capable of keeping the rest of the team focused when the time for cutting up has come and gone, or whether his extremely extroverted nature makes that impossible. There's a reason Pitino has described this as a "fun" group, but has called the team's focus into question.

There certainly hasn't been anything to not love from Samardo Samuels thus far in his brief Cardinal career. He plays hard, he seems to have a terrific attitude, and he's a friggin' monster.

At the risk of sounding extremely lame, I think the facet of his game I might be most excited about is his ability to make free-throws. Say what you want, but having a big guy who can stroke it from the stripe is an enormous boon, especially when his teammates aren't exactly going to set the world on fire from the line. It also makes his presence that much more valuable in late-game situations against teams that don't feel the need to take scouting reports seriously. I mean how many times over the last three years did we see teams seek out David Padgett to foul in the last minutes of games when the big man was actually the best or second best free-throw shooter on the floor?

All the dunking is cool, too. 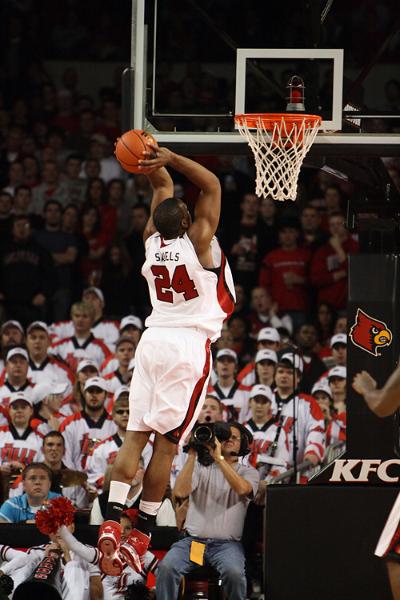 Again, I don't think we can start debating his All-American credentials until he goes up against another legitimate post player, but, yeah, the kid's all right.

It was awesome watching Mature and Content Edgar run the show over the weekend, but we can't celebrate the passing of his evil little brother until we see how he reacts to his first taste of adversity as a junior.

South Alabama is still in the process of adjusting to life sans Demetric Bennett, but this is a squad that's still probably the class of a pretty solid conference...and the Cards just completely dominated them.

It was a domination so thorough that it left USA head coach Donnie Arrow saying the following:

"The first thing I'd like to say is that, for you people that are from here, you may be looking at the national champions. Coach Pitino has assembled a group of guys that can go at least 10 or 11 deep and not miss a beat.

"I was reading his book last week and he said you've got to be positive, and with a team like that, it's easy to be positive. He's got a heck of a group and they come at you. You can prepare for it, but you can't prepare the heat you're going to get for 40 minutes. Those guys have bought into it and they're going to keep coming at you for 40 minutes. I thought our guys did a decent job, but they want you to crack and in most cases, that's what happens. Things will go good and all of sudden, they'll cause four turnovers and force the other team to take a bad shot - which is like a turnover - and boom, they're up 22 points. That's what happened to us."

I loved the name Donnie Arrow before the 2008 Billy Minardi Classic, and now I love the man Donnie Arrow.

There are few things in life that make me more happy than an overly excited Jerry Smith celebrating a turnover caused by the front of the press.

In his brief career, I don't think Preston Knowles has had a single stint on the floor where he hasn't forced me to make at least one comment about how fun it is to watch him play defense. He's pressing just a bit on the other end, but knowing that the ball-hawking is never going to go anywhere should be enough to help all of us sleep comfortably.

Conflicting reports abound on the status of Terrence Jennings. Some say minor injury, more say brief DC-esque suspension for attitude issues. A motivated Jennings would definitely be a major boost for the squad, but his apparent struggles would be far more of a concern if George Goode hadn't been the most pleasant surprise of the start of the season.

Earl Clark has started his junior season the same way he began his sophomore campaign: playing like he's already in the NBA. He was tremendous in the first half against USA when he sat back and let the game come to him, but he ignored his teammates far too often over the course of the weekend's other 60 minutes. Not that this is a cause for concern. It won't take long for Earl to again realize that the talent around him is bountiful enough that he can stand out simply by acting out his role in the set offense.

Your natural size and talent aren't going anywhere, my man, and neither is that NBA coin.

Not sure about the one high sock, Andre. I know you're a senior captain and you're coming off of a great season and offseason, but let's go ahead and take a step back. Don't be embarrassed, man, it's November, we're all still trying to figure out what works and what doesn't work.

This team is so deep that you almost forget about guys like Reggie Delk, Jared Swopshire and Kyle Kuric until they check into the game. I mean these are players who would start or be key contributors on almost every other D-1 team in the country.

A tip of the cap to the group of coaches that made this happen.