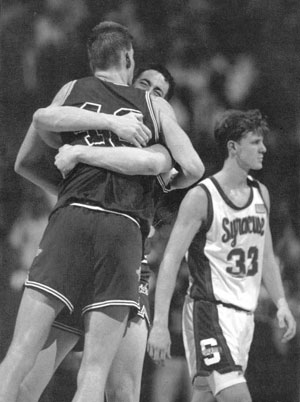 Kevin Anderson is a fun player to watch, and the Spiders apparently have some decent young talent, but this isn't a game Syracuse should win by less than ten points. Of course the Orange have always been able to handle less-talented U of R teams.

George Hill bolted for the NBA, but Oooey-Pooey still has enough players to field an eligible team, which means they're capable of beating Indiana.

First Lester Hudson spotting of the year? Don't mind if I do.

BC isn't much outside of Tyrese Rice, but making the Final Four of the Preseason NIT would still be a nice early statement for Norm Roberts and the Johnnies to make.

Whatever. It's Big East basketball.

The names aren't as sexy, but this is much more of a must-see game than the one on the big station. God I missed you, Steph. My how you've grown.

Lo Wade thought about playing in this game, but then decided stealing a TV was the more logical move. Then he missed a dunk.

Meaningful games to watch half-consciously in bed? I love this sport.