University of Louisville senior forward Terrence Williams had successful knee surgery on Wednesday evening. He had suffered a medial meniscus tear in his right knee in a pickup game on Tuesday at the Yum! Center.

The prognosis remains the same in that he will be sidelined for 4-6 weeks. Dr. John Ellis performed the surgery at Jewish Hospital.

Good news for a man who deserves to have a sensational senior season.

Although T-Will will likely be saying he's ready to go in three weeks, I think the odds of him seeing action in The Bill are quite slim (single tear). If he isn't back for the game against Western on Nov. 30, then I'd expect him to make his debut in the Marques Maybin Classic the next week, although his playing time will likely be sporadic since it's a three games in three days event. 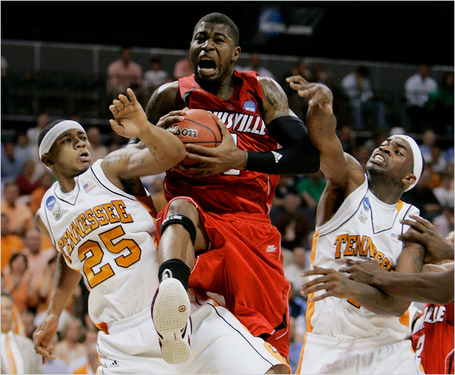 The mental hurdle's probably going to be the toughest one to clear in this process for Terrence, but based on his progression over the last three years I'd say he's going to be OK.

If Williams is, in fact, out for the first three or four games of the season (excluding exhibitions) it will present a great opportunity for newcomers like Reggie Delk and Jared Swopshire to see some extra time at the three, and it will also give Rick Pitino a chance to play with some different lineups.